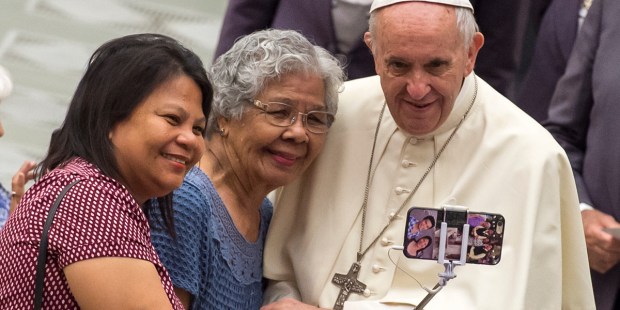 The doctrine of Jesus is a before-and-after moment in history’s treatment of women, said Pope Francis today. But still women are humiliated and mistreated, which is a sin against the Creator.

Taking his inspiration from the Gospel reading of today, where Matthew says, “Everyone who looks at a woman with lust has already committed adultery with her in his heart,” the pope reflected on the many ways in which women are exploited in today’s society, despite Jesus’ teaching.

He explained how Jesus’ words about women were radical and ground-breaking and “changed history.”

Jesus’ doctrine on women changes history. Before Jesus, the view about women was one thing, but after Jesus it is another. Jesus dignifies women and puts them on the same level as men because he takes that first word of the Creator: Both are “the image and likeness of God,” both of them — not first the man and then a little lower down the woman; no, both are. And a man without a woman beside him – whether as a mother, as a sister, as a bride, as a working companion, as a friend – that man by himself is not the image of God.

Read more:
‘This journey must go on!’ If you haven’t read John Paul II’s Letter to Women, don’t miss it

Reflecting in particular on the gospel words about men desiring women, Pope Francis lamented how we see women treated as objects of desire in the media or used to sell a product. We see her “humiliated” or “wearing no clothes.”  Women are the victims of that “use and throw away mentality” and don’t even seem to be treated as “a person,” he said.

This is a sin against God the Creator, rejecting women — because without her, we men cannot be the image and likeness of God. There is an anger and resentment against women, a nasty anger. Even without saying it… But how many times do young women have to sell themselves as disposable objects in order to get a job? How many times? “Yes, Father, I heard in that country…”. No, here in Rome. There’s no need to go far away.

Pope Francis asked his listeners what they would see if they took a walk at night around certain areas of the city where so many women — including migrant women — are being exploited as in a market.  When men approach these women on the streets, he said, they are not saying “Hello” to them but asking how much they cost and then quieting their consciences by referring to them as prostitutes.

All this happens here in Rome, it happens in every city. Anonymous women, women we can describe as “faceless” because shame covers their faces, women who do not know how to laugh — and many of them do not know the joy of breastfeeding their baby and the experience of being a mother.

Read more:
The saint who risked his life rescuing prostitutes

But, even in our everyday life, without going to those places, there is this ugly way of thinking, of rejecting women or seeing her as a “second class” person. We need to reflect more deeply about this. And by doing this or saying this, by entering into this way of thinking, we despise the image of God, who made man and woman together with his image and likeness. This Gospel reading helps us to think about the marketing of women, a trade, yes, trafficking, that exploitation which is visible but also that trade which we can’t see but is taking place out of sight. A woman is trampled underfoot precisely because she is a woman.

The pope concluded his homily by stressing how during his ministry Jesus encountered so many women who were despised, marginalized and cast aside and with great tenderness he restored their dignity. Jesus had a mother and “many female friends who followed him to help him in his ministry” and to “provide support,” he said.