Why tech time is dangerous for the family 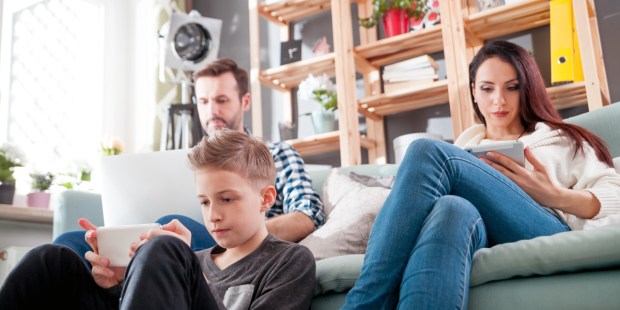 Your child needs interaction — and 4 minutes a day isn’t enough.

Study after study has shown that regular parent-child interaction is crucial for a child’s growth and healthy development. Smartphones, texting, Facebook, and Instagram may provide the illusion of connection. But in reality, this hyper-interconnectedness actually fragments the family and often cuts into integral bonding time.

A comprehensive study of how U.S. children spend their time revealed that they spent only four minutes per day, outside of mealtimes, talking with a parent.

If that sounds alarming, take heart — and take action. You can try restricting the amount of tech time in your family, by buying phones with the bare minimum tech you need to get by and imposing time limits and tech free days, delay buying your kids cell phones until 8th grade, and leaving your phone locked up or at home when you don’t really need it.

But sometimes even all these measures don’t fix the problem. There are numerous groups that can help, including one of the flourishing Catholic apostolates, a group of people dedicated to propagating the faith, that aim to help families cut down on technology’s intrusion and increase positive interaction between moms and dads and their kids.

One of these apostolates, Paradisus Dei, is committed to walking alongside families — with a special focus on fathers — and supporting the proper formation of marriages, children, and families.

The organization has put out the call to parents to minimize the use of technology in the home and increase personal interaction with their children.

Unfortunately, 54 percent of kids in an AVG Technologies survey reported feelings less valued by their parents because they had to share their time with a screen.

In an effort to change that paradigm, Paradisus Dei produced a video series that draws upon social and medical series, combined with Catholic Church teachings, to educate families on various topics, including how to meaningfully interact with children and minimize tech’s intrusion.

Fortunately, families are resilient, and it’s never too late to begin a new and healthy routine that promotes and preserves time for family connection.

Here are just a few of the important observations parents learn in the series:

And it’s always a good idea to turn off electronics two hours before bedtime and devote that integral time to building a powerful bedtime routine that includes family time and prayer.

One of Paradisus Dei’s most popular programs, That Man Is You, is being used in parishes across the country to address the challenges men face in today’s society, especially those relating to their roles as husbands and fathers.

For more information on That Man Is You is available on their website.

Read more:
Why are modern parents so overwhelmed and burned out?