What Catholics must do for a world plagued by suicide 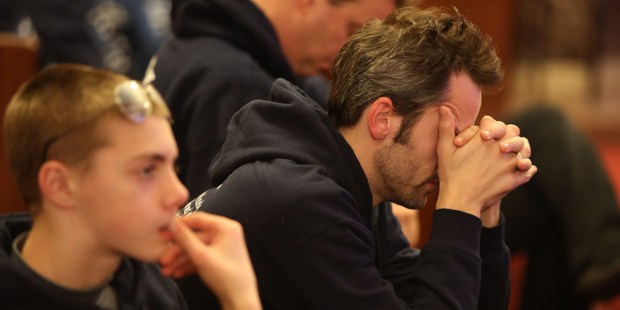 Prevalent aspects of our culture are very dangerous psychologically. But the Church has antidotes.

Suicide is not a problem mainly of the wealthy celebrity suicides that make the news. Nor is it limited to those suffering from depression or ongoing mental illness, as author Elizabeth Scalia points out.

As multi-faceted and complex as the epidemic is, there was a study two years ago that is still worth pondering.

Statistically for one group, suicide is a “vanishing phenomenon,” according to a study in the Journal of the American Medical Association. In a study of nurses, “among the 6,999 Catholic women who said they attended Mass more than once a week, there was not a single suicide.”

It would be terribly wrong to draw from this statistic any idea that people who struggle with depression (or have lost Catholic family members to suicide) are somehow not Catholic enough. Faith is not itself a remedy for sickness, mental or physical.

Catholics have a duty to look at why religion in general and Catholicism in particular is shown to make such a big difference, to find out how we can help our neighbors. We are called to engage our culture and we are far stronger than we think.

First, religion gives you the sense of belonging you desperately need.

Human beings cannot survive without community — and religion creates community better than anything else.

In his book The Righteous Mind, Jonathan Haidt opens a key chapter called “Religion Is a Team Sport” with his account of a University of Virginia football game, from the point of view of a fan sharing in the rituals.

Religious worship does what a UVA football game does, he shows, but in a sustained way. He says religion’s critics reduce religion to “believing and doing” — doctrine and morality — but just as important is belonging.

Haidt marshals a mountain of evidence that religion is the factor that changed everything for human beings, allowing them to do what no other animal can do: “cooperate without kinship,” building cities and nations.

Secular society, from Sesame Street to Social Media, has tried to create belonging without God, and has failed. The world is crying out for what religion can give it.

Read more:
Why Are 2 Different Popes Telling Us to Read “Lord of the World”?

Second, the Catholic practice of confession also must play a factor.

If the suicide-free group was going to Mass more than once a week, you can bet they were also going to confession.

Confession’s primary job is a spiritual one, but it also has significant ancillary psychological effects.

I heard one of my favorite confession stories from a therapist.

Her patient had been in a terrible cycle of depression and self-disgust ever since high school. Nothing seemed to help. One day, she met the patient in front of a Catholic church. They ducked inside to get out of the rain, and saw people going to confession.

“Should I go also?” asked the patient, who had received the sacrament as a child.

“No!” said the counselor. She imagined that confession would make her patient obsessed with guilt and heighten her self-loathing.

The patient went anyway, and emerged from the confessional with her first smile in years, and kept improving in the weeks to come. The therapist studied more about confession, eventually became Catholic and now counsels regular confession for her Catholic patients.

Confession gives you a fresh start; it is a chance to tell another human being (and God!) “I am so sorry for what I did,” and to hear back, “I absolve you … The Lord has freed you from your sins. Go in peace.”

The benefit of that is incalculable. You need no longer consider your life ugly and worthless; instead, you put to death the ugliness in your life and God himself affirms your worthiness.

Third, faith protects you against despair.

“Religious convictions and practices can help people foster a sense of hope, even in the midst of major crises or adversities,” psychiatrist Dr. Aaron Kheriaty told the Los Angeles Times in its article about religious people and suicide. “Religious faith can help people find a sense of meaning and purpose even in suffering.”

This one thing — real hope — may be the biggest piece missing from the secular world. With faith, we can hope even through prison, death and darkness.

The suicide epidemic represents an enormous failure on the part of the world — and people are starting to notice.

In his new book, Bishop Robert Barron points out that people raised in secularism are beginning to chafe against it. Reducing everything to Scientism erases poetry and art, and darkens the human heart.

“When you suppress the desire for God, which secularism does necessarily, it’s very dangerous psychologically,” Bishop Barron said. “I see it all the time in the form of addictions and deep depressions. So, I’m doing this out of deep concern for people. It’s dangerous stuff, to shut down the aspiration toward God.”

We are our brother’s keeper. We have what our neighbors need — what they can’t live without. It is our duty to provide it.

Read more:
5 years ago today, feeling like a failure of a man, I tried to kill myself