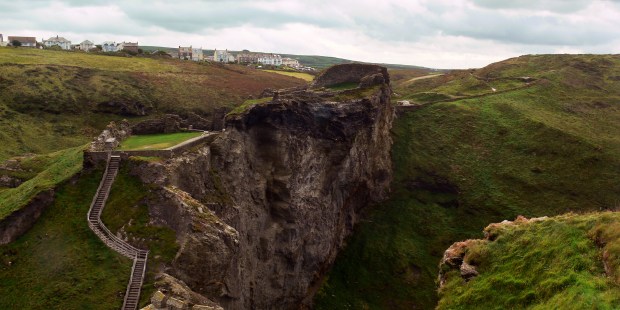 The discovery of Latin words and Christian symbols on a 1,300-year-old windowsill in Cornwall lends credence to the stuff of legend

The site of Tintagel Castle in Cornwall, England, has been associated with the legend of King Arthur, ever since the 12th century when Geoffrey of Monmouth helped popularize the myth of the king and his court in his Historia Regnum Britanniae.

For years archaeologists and historians have sought to find proof of the existence of King Arthur, who was said to have defended the Britons against Saxon invaders in the late 5th and early 6th centuries. Today, the discovery of a stone windowsill inscribed with Latin words and Christian symbols is, at the very least, proof that a medieval royal court on the coast of Britain may have actually existed.

According to the Telegraph, the two-foot long slab of stone is inscribed with Latin and Greek words and contains Christian symbols “similar to those found in illuminated Gospel manuscripts of the time.”

The Telegraph reported that English Heritage, which manages Tintagel, said the discovery “lends further weight to the theory that Tintagel was a royal site with a literate Christian culture.”

Of the inscription, the Telegraph reported that:

The writing is believed to have been the work of someone practicing their handwriting, perhaps carving words into the stone while gazing out to sea. It includes the Roman and Celtic names “Tito” and “Budic”, and the Latin words “fili”, or son, and “viri duo”, meaning “two men”. The Greek letter delta also appears.

Tintagel is the site of both an original medieval settlement, which legend tells us was the seat of King Arthur, and a later 13th century castle built by Richard, Earl of Cornwall, who selected the site to connect his regime to the Arthurian legend.