Homes in Homs: A few more Syrian families get a roof over their heads again 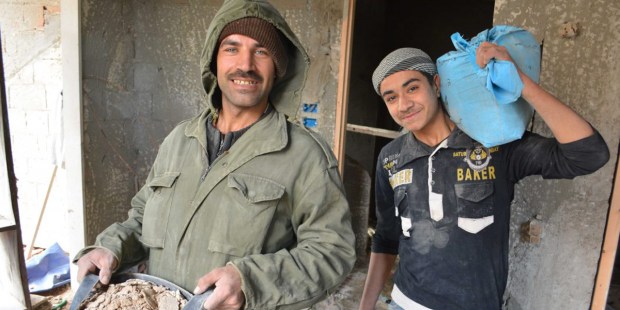 Photo Courtesy: Aid to the Church in Need
Share
Print
Aleteia - published on 06/19/18

Aid to the Church in Need is funding nearly 100 houses that will be rebuilt and repaired by the end of summer.

Catholic charity Aid to the Church in Need, which supports persecuted Christians, is helping to fund the renovation of 97 homes in Homs, Syria, adding to the 110 it already helped repair.

Melkite Greek Catholic Archbishop Jean-Abdo Arbach and Syriac Orthodox Archbishop Selvanos Boutros Al-Nemeh presided at a ceremony in which families benefiting from the plan each received a commemorative piece of rock.

Aziz Al Houri, one of those who benefits from the initiative, told officials of the charity: “We thank you for what you are doing. We are so happy for us and our children for we are going to return to our own home.”

Another beneficiary, a pregnant young woman, said she hopes to have moved into her repaired home in time for the birth of her child. This round of houses is expected to be completed by the end of summer.

Structural engineers have been evaluating damaged houses due for repair, case by case.

With its house repair project, the charity is prioritizing the poorest and neediest families struggling to pay for rented accommodation.

But there are still a vast number of people waiting for their homes to be rebuilt.

Homs saw some of the first protests of the Syrian conflict back in the spring of 2011 and in the years that followed, much of the city was obliterated, forcing vast numbers of people to flee.