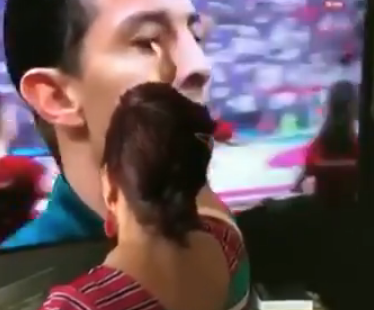 Martha González, a 30-year resident of El Paso, Texas, is being credited with helping the Mexican national soccer team beat Germany in the World Cup thanks to a viral video showing her blessing her favorite team.

The video, which circulated on social media after Mexico beat the German squad in a 1-0 victory, shows the Mexican team singing their country’s national anthem as they prepare to face Germany in the World Cup. A petite woman walks across the large television screen, carefully making the sign of the cross on the head of each player as as the camera pans across the field.

VIRAL VIDEO: Mexico's World Cup team played their hearts out in the upset over Germany, but many believe this grandmother of a local teenager helped propel El Tri to victory. (Video: @paolaa_janet)

“It’s usual for me, I always do it in my family. I bless my children whenever they leave, when they arrive, they visit me, they leave, I give them the blessing, it is not spontaneous,” Gonzalez told Telemundo Chicago.

After the video went viral, Gonzales told Telemundo that she will continue to make the sign of the cross on each player as they compete in the World Cup.

“I feel very proud, I feel very happy,” said González. “I love the Mexican national team, I love my country that is Mexico, I am proud, my children are Mexican.”