You probably don’t think of the 10 Commandments like this! Check out the pope’s amazing insight 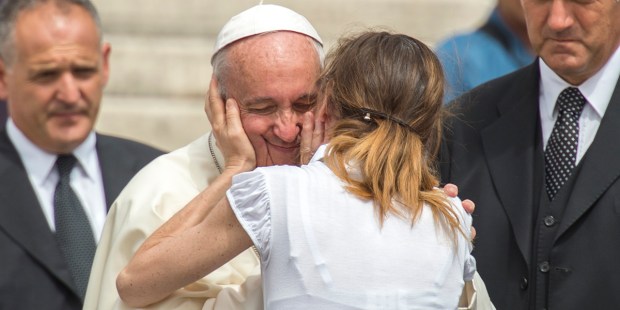 The devil was able to convince Eve of a lie. Do we buy into it too??

Pope Francis has centered on one word in the Bible that helps us to see the Ten Commandments as they should be seen — not as cold directives, but as an invitation to relationship.

The pope offered this reflection this morning at the general audience, as he continued with his new series of catecheses on the commandments.

“In the Bible the commandments do not exist autonomously, but are part of a relationship,” he said.

The Holy Father pointed out that at the beginning of Exodus 20, “we read – and this is important – ‘And God spoke all these words.'”

“It appears to be an opening like any other, but nothing in the Bible is banal,” he said. “The text does not say, ‘And God spoke these commandments,’ but ‘these words.’

“The Jewish tradition always calls the Decalogue ‘the ten Words.’ And the term ‘Decalogue’ is intended to say precisely this. And yet they have the form of laws, they are objectively commandments. Why, then, does the holy Author use, right here, the term ‘ten Words?’ Why? And why not ‘ten commandments?'”

The pope asked what difference lies between a command and a word?

“A command is essentially a communication that does not require dialogue. The word, on the other hand, is the essential means of relations as dialogue. … A word is received, communication is given, and the commandments are words of God: God communicates Himself in these ten Words, and awaits our response.”

Francis noted how different it is to receive an order, versus to “perceive that someone is trying to speak with us.”

And he reflected on how Satan at the beginning was able to deceive Adam and Eve precisely on this point. “He wants to convince them that God has forbidden them to eat the fruit of the tree of good and evil to keep them in submission. The challenge is precisely this: is the first rule that God gave to man the imposition of a despot who forbids and compels, or is it the care of a father who cares for his young and protects them from self-destruction? Is it a word or is it a command?”

“The most tragic, among the many lies that the serpent tells Eve, is the suggestion of an envious deity: ‘But no, God is envious of you’ – and of a possessive deity – ‘God does not want you to have freedom.’ The facts show dramatically that the serpent lied; he made them believe that a word of love was a command.”

Pope Francis said that man is always at this crossroads, facing the question: “Does God impose things or does He take care of me? Are His commandments just a law, or do they contain a word, to care for me? Is God master or father?”

And he answered, “God is the Father: never forget this. Even in the worst situations, think that we have a Father Who loves us all. Are we subjects or offspring?”

“The Holy Spirit is a Spirit of sons, He is the Spirit of Jesus,” the pope said. “A spirit of slaves cannot but receive the Law in an oppressive way, and can produce two opposing results: either a life made up of duties and obligations, or a violent reaction of rejection. … The commandments are the path toward freedom, because they are the word of the Father that makes us free in this journey. The world needs not legalism, but care. It needs Christians with the heart of sons. It needs Christians with the heart of sons: do not forget this.”

Read more:
Pope explains why almond blossom is a symbol of God’s love