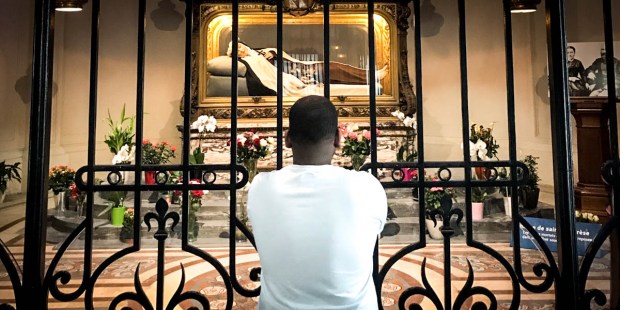 Here are the straight facts of a highly misunderstood topic.

Often non-Catholics will claim that “Catholics worship saints.” This statement usually comes from the fact that Catholics often pray to saints, performing various devotions to them.

While it may appear to some people that Catholics are worshiping saints, what they are doing is far from it.

Catholics firmly believe that adoration and worship is due to God alone. Only God is divine and so only God can be the object of worship.

Since the very beginning of the Church, Catholics have prayed to saints, honoring them and asking for their heavenly intercession. This arose from the belief that the Church is much larger than the physical buildings and people we see with our eyes on earth.

Catholics believe that there are three states of the Church, as explained by the Catechism of the Catholic Church.

But at the present time some of [Jesus’] disciples are pilgrims on earth. Others have died and are being purified, while still others are in glory, contemplating “in full light, God himself triune and one, exactly as he is.” (CCC 954)

The Church has described these three states as a “communion,” meaning that members of the Church are united by a spiritual bond that is difficult to describe with words. This is expressed in several places in the New Testament.

For I am convinced that neither death, nor life, nor angels, nor rulers, nor things present, nor things to come, nor powers, nor height, nor depth, nor anything else in all creation, will be able to separate us from the love of God in Christ Jesus our Lord. (Romans 8:38-39)

[S]o we, who are many, are one body in Christ, and individually we are members one of another. (Romans 12:5)

Therefore, since we are surrounded by so great a cloud of witnesses, let us also lay aside every weight and the sin that clings so closely, and let us run with perseverance the race that is set before us. (Hebrews 12:1)

Jesus himself confirms this reality when conversing with Elijah and Moses at his transfiguration (see Matthew 17:3-5). He shows us that death does not separate us and that we are able to speak with those who have died before us.

With this in mind, Catholics then pray to the saints as one person asks for someone else’s prayers on earth. This is possible because of the communion which exists in the body of Christ.

One of the reasons why Catholics ask saints for prayers is because the saints are united with God and are able to present our petitions in a way that is most fitting and acceptable to our heavenly Father. Just as we ask holy people on earth to pray for us, we seek the prayers of the saints, who clearly displayed their holiness on earth and are now residing with God in heaven.

In the end, Catholics believe that the world is much more than the eye can see and the spiritual realm is real. We are connected to people who have gone before us in a spiritual way and are able to converse with them. While we may not always be able to hear their responses, the reality of this phenomenon is a basic tenet of the Catholic faith and is rooted in scripture and tradition. It requires faith and a belief that prayers have an ability to open us up to a spiritual world much larger than we could possibly imagine.

Read more:
5 Ways the saints can help you with everyday problems