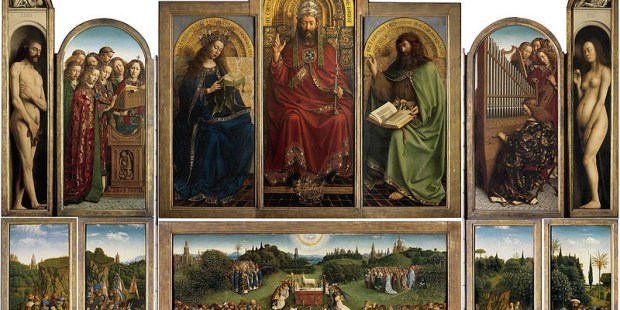 Ghent’s mayor Daniël Termont cautions the public not to go digging up the city’s streets.

The Adoration of the Mystic Lamb, also known as the Ghent Altarpiece, is a complex 15th-century polyptych painting that adorns St. Bavo’s Cathedral in Belgium. Attributed to the Early Flemish artist brothers Hubert and Jan van Eyck, it is widely considered a masterpiece of the European style and one of the world’s treasures.

As with all great works, the more beautiful it is the more likely someone will want to steal it. Indeed the Ghent Altarpiece has been stolen several times in the last 400 years. It was seized by the Germans in WWI, but was returned thanks to the Treaty of Versailles. However, St. Bavo’s barely had time to hang the paintings back on the walls before the Nazis took possession the masterpiece during WWII.

The Independent reports that the Adoration of the Mystic Lamb was eventually returned to Ghent thanks to the efforts of the “Monuments Men” (curators and professors who recovered countless artworks stolen by the Nazis). But there were two portions of the polyptych that were not returned, because the Nazis never saw them. These two sections, depicting the Just Judges and St. John the Baptist, were stolen in 1934.

Over the months following this heist Belgium authorities became involved in negotiations to recover the painting, receiving ransom notes demanding one million Belgium francs (roughly $66,000) for their return. During these proceedings, the painting of John the Baptist was recovered, however the painting of the Just Judges is still missing to this day.

Thankfully, we have been left with a few clues to the final painting’s whereabouts, as the Independent explains:

A few months later a 57-year-old money exchange agent, Arsene Goedertier, died of heart failure shortly after revealing that papers relating to the theft were at his home in Wetteren.

An envelope containing copies of 13 ransom notes was found in his desk, along with an unsent final letter suggesting that the missing panel “rests in a place where neither I nor anybody else can take it away without arousing the attention of the public.”

While it is unknown if this Arsene was the culprit, with his death it seems to be a moot point. What did capture the attention of the Belgians were the clues left in the last, unsent letter: oiseau, arte, jean, nina, erpe and fourrure, along with the number 152.

These clues have baffled treasure hunters for 84 years, but now it seems that the riddle has been solved. Engineer Gino Marchal announced last week that he had determined the last painting to have been buried under Kalandeberg square in the center of Ghent. Marchal explained that he linked four of the six words to specific points in the city, which were each exactly 152m from a single point on the Kalandeberg.

While some have waved this away as a publicity stunt for Marchal’s upcoming book release, the public prosecutor’s office and Ghent’s mayor Daniël Termont are taking it quite seriously.

“This is of great importance for the city and for Flemish art history. It would be nice to find the panel for this generation. If this new theory was no more than a stunt to promote a book, I would never have cooperated, and as a city we would not have made our council hall available for a press conference.”

While the authorities have not announced any plans to excavate the city street, they did ask the public not to go digging on their own. “That is work for the police and the public prosecutor’s office,” Mayor Termont reminded his people.