What our baby shower taught me about dignity 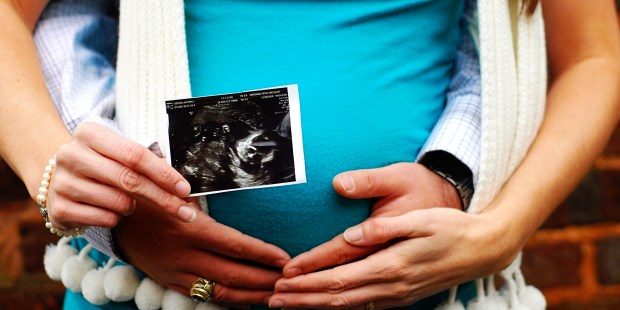 No one at the store or at the party asked us if we planned to keep the baby before congratulating us.

She stared at me blankly.

“We take this scanner, walk around the store and select the items to put on the baby registry.”

And so I was introduced to the world of baby showers.

Now — cut me some slack — I had never been invited to a baby shower before and we were expecting our first child. And so we walked around Target and Babies R Us and scanned this Diaper Genie (never used once) and that bottle set (I still have dishpan hands to this day). Of course, I worked the scanner gun while my wife wielded her awesome veto power. (We don’t want a complete set of classical Baby Mozart CDs to augment our child’s intelligence and aesthetic sensibility while sleeping?)

Before long, however, we found ourselves warmly embraced and welcomed to a relative’s house. Hors d’oeuvres were served. Coffee was poured. Cake was cut. Pictures were snapped as we unwrapped presents from friends and family. Now, to be honest, it is a bit difficult to gush about a Diaper Genie in front of a room full of people, but I did my level best.

But as we drove away that night with a trunkful of gifts and my hand on my wife’s, it dawned on me. Baby showers are testimonies to dignity.

We didn’t register for gifts, eat hors d’oeuvres, take pictures, tell stories and receive countless hugs and well-wishes from friends and family for the baby we just had. This was all for the baby about to come. No one at the store or at the party asked us if we planned to keep the baby before congratulating us. They saw pregnancy as a de facto reason for hearty congratulations. There was no switch to be flipped — no binary worldview so callous as to recognize the precious miracle of pregnancy ONLY on the condition that we decided to have the child. It was simply taken for granted. A child is coming. A beautiful, life-changing, incomparable joy is on its way (albeit with late night feedings, diaper changes, periodic fevers and ultimately nights where parents pace over her being 15 minutes past curfew).

That pregnancy is a child. A dignified child entrusted to us as a gift from God. With DNA and bones and skin and nerves and a circulatory system, only an implacable denier of science (in a world aghast at science denial!) would dismiss the nature of what  this pregnancy is and is in the process of further becoming. In the eyes of the most cynical scientist, the earliest stages of pregnancy, if discovered on Mars, would constitute life. And yet some are not so sure that the same would prove true on Earth.

The baby shower is a testimony to dignity. And so is preparing a nursery. And strangers talking to a pregnant woman’s belly suppressing the awkward urge to touch it. And parents’ deliberation over picking just the right name. And the patient assembly of impossible cribs. And the anxiety over doctor visits and ultrasounds. And the elation over the bumpety-bumpety-bump of your child’s heart heard on Doppler. These moments and several thousand more testify that “something inexplicably wonderful is happening here.” Facts are stubborn things. Pregnancy cannot be reduced to mere chromosomes and neurotransmitters or cold debates about “personhood” or a ball of cells regarded as worthy or unworthy depending on a choice. No one who has ever been to a baby shower could ever honestly countenance such a self-deceiving worldview. This pregnancy is not a child? C’mon … As William F. Buckley might say,

“I won’t insult your intelligence by suggesting that you really believe what you just said.”

Or as George Orwell purportedly said,

“There are some ideas so absurd that only an intellectual could believe them.”

At a baby shower, everyone “ooos and ahs,” offers advice, smiles and tells stories of their morning sickness, their delivery, their late nights, their learning curve and their joy at the baby in our midst. And we are reminded that, once upon a time, you and I were the baby. To paraphrase Shakespeare, it is a dignified tale told by loving human beings: full of sound and fury, signifying everything.

The eminent psychiatrist William James once spoke words that could easily be applied to the wonder experienced at a baby shower, to the mystery and meaning of a baby.

“I can, of course, put myself into the sectarian scientist’s attitude, and imagine vividly that the world of sensations and of scientific laws and objects may be all. But whenever I do this, I hear [an] inward monitor … whispering the word ‘bosh!’ Humbug is humbug, even though it bear the scientific name, and the total expression of human experience, as I view it objectively, invincibly urges me beyond the narrow ‘scientific’ bounds.”

And all it took was a baby shower to remind me.