“After this our exile”: What we learn from watching Mary flee 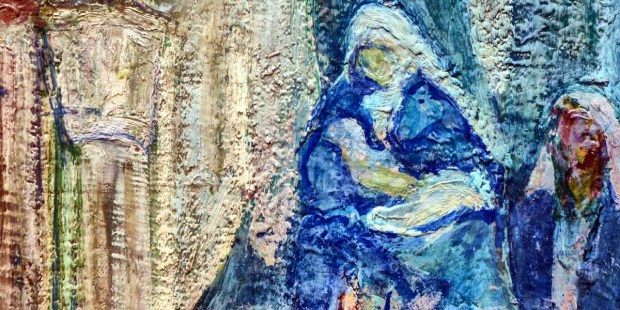 He shook his young wife awake in the dark of night. “Get the baby,” he hissed. “We have to go. Now.”

Sleep-addled, she blinked in a room illuminated only by moonlight. “What?” she asked. “Why? Where are we going?”

His words were terse, as he grabbed a few necessities and tossed them into a bag. “It’s … complicated. But I promise you, we have no choice.”

She’d never heard him so brusque, and she was sure his efficiency was covering fear. So she dressed in the dark and put the sleeping baby in a sling. A small bag slung over his shoulder, her husband pushed the door to their rented home open, looking first one way, then the other before pulling her out into the street.

They moved quickly between shadows, sneaking out of town before the sun rose. Before long, they found themselves in the desert. They moved quickly, his eyes continually scanning the horizon. Every few minutes, he looked nervously back over his shoulder.

Their life hadn’t been peaceful; nobody’s was in a country ruled by a dictator who was more concerned with his power than with his people. But she hadn’t expected this. What on earth could have happened the night before to send them running for their lives? Finally, she moved closer to her husband and whispered, every sound loud against the background of utter silence: “What is going on?”

He fell into silence, his breathing heavy from exertion and emotion. Behind them lay people who would suffer tremendously in the next few days. Ahead lay hundreds of miles of desert, to be crossed under cover of darkness for fear of being discovered and brought before the tyrant who had ordered their child’s death. And at the end of the road, who knew what welcome they would receive? They didn’t speak any language other than their native tongue. And while he was a hard worker, he had three mouths to feed in a country that looked down on his kind.

They would deal with that when they got there. Now, they had to focus on flight, on evading the corrupt government that slaughtered its own citizens. They had to find water. Never mind the unimaginable grief of those left behind. One foot in front of the other, trusting in God to lead the way. “But please, Father, let them welcome us in Egypt.”

Whatever the uncertainty, Joseph and Mary kept walking. As their compatriots would 70 years later, fleeing before the destruction of Jerusalem. As Roman Christians would during the Diocletian persecutions. As Jews would any number of times. As Huguenots would, Armenians, Poles, Vietnamese, Serbs, Tutsis, Afghans, Syrians, Venezuelans, Colombians, Rohingya.

“Even Jesus’ parents had to flee their own land and take refuge in Egypt to save the life of their child,” Pope Benedict said. “The Messiah, the Son of God, was a refugee.” The refugee Son of a refugee Mother left us with a mandate to treat every person as neighbor, to welcome every stranger. (Lk 10:25-37, Mt 25:35) He also left us with a model of his Mother, the Mother of Refugees. When we look upon refugees (whether Central American or Middle Eastern, clutching a rosary or a Quran), we look upon the face of Jesus. We look upon the sons and daughters of the Blessed Mother.

Watching the Holy Family flee is for us today, as it has been through the centuries, an invitation to see human beings as human beings. No one can be reduced to an immigration status or a bank statement or a family tree. All are children of the Father whom God has loved since before there was time and for whom he laid down his life. They are beloved of the Virgin Mary, Mother of Refugees.

In the Salve Regina, we pray that Mary would show us Jesus “after this our exile.” It’s an earnest prayer offered by all who long to return home to heaven, but all the more by those who live in exile in this world in such a profound way.

May we who love the Holy Family honor them by praying earnestly for those who, like them, flee their homelands in order to save themselves and their children.

Mary, Mother of Refugees, pray for us.