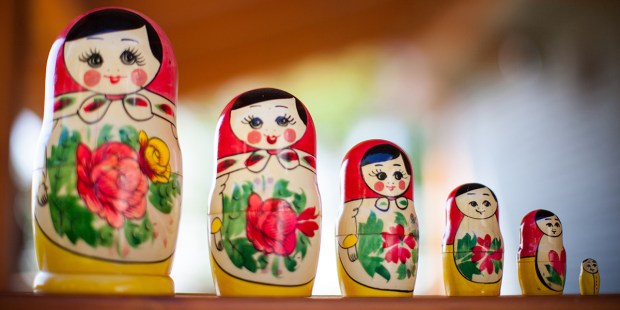 With the 50th anniversary of the encyclical ‘Humanae Vitae’ in July, a priest and theologian explains the meaning of Christian marriage.

Humanae Vitae is definitely demanding, but realistic, according to Stéphane Seminckx, a priest and doctor in medicine and theology, as he shows in his published work on Christian marriage, which explains the meaning of marriage and conjugal love. To illustrate the three dimensions of love, inextricably linked in Christian marriage, he uses the image of nested Russian dolls, which represent the intertwining of Eros-love in Philia-love, which in itself is incorporated in Agape-love.

Here, Seminckx gives us a little more insight on how the simple Matryoshka dolls can so eloquently embody the teachings of Christian marriage …

Aleteia: You compare conjugal love with Russian dolls. How did this idea come about?

Stéphane Seminckx: It was in 2006, while I was giving a conference on the encyclical of Benedict XVI, Deus Caritas est, that I brought up the three facets of love that must go together, interlock, so that the couple can experience this gift fully. The image of the Russian dolls allowed us to understand the meaning of Christian marriage in the blink of an eye.

What are the three dimensions of conjugal love?

The first is the love of attraction (eros, in Greek). It says: “I see you as something good for me.” It’s a self-serving love that responds to a need (to be attracted by the other to be able to love them), and it possesses a carnal connotation. It is the source of pleasure. The second, which includes and transcends the first, is the affectionate love (philia). It states: “I see you as someone: I look for your well-being.” It’s a selfless love, which responds to the need to come out of oneself, and it has a spiritual connotation. It is a source of joy. Finally, the largest doll that embraces the two previous dimensions is conjugal love (agapé). It means: “I give myself to you,” it is a total gift and it responds to a vocation. It is the source of happiness.

How do we manage to interlink all three dimensions?

The metaphor of the Russian dolls was inspired by the definition of chastity, given by the Catechism of the Catholic Church, which states: “Chastity means the successful integration of sexuality within the person and thus the inner unity of man in his bodily and spiritual being.” The successful integration of sexuality is, in other words, the eros in the person. This assumes that the human person forms a unity, which has disintegrated since the Original Sin. Before the sin, Adam and Eve had control of their urges. Through marriage, the couple is called to live chastely, and receives a specific grace that helps the spouses to forge this control through their own personality; this sovereignty creates unity and freedom: because I restrain myself in order to give myself totally. This unity is not a simple acknowledgement, but a challenge of love.

Isn’t it an ambitious challenge given the sinners that we are?

Ambitious, yes, but at the same time realistic! Because God gives what He asks for. But first of all, there’s a fundamental choice to make: do I want to get myself dragged into love by God? It’s God who passes down love. Do we want to go and drink from the source and live this love on a divine scale? This assumes a spiritual combat, so that each conjugal act maintains its truth of being a total gift to the other, but this must not be experienced as a millstone around the neck! It’s better to see it as a training ground of love, an occasion to assert yourself in God’s love. And then it’s a positive fight, joyful, anchored in hope. With our ability to love we aim for fulfillment. We don’t say: “I love you in moderation” or “I love you, but only on the weekend.” Conjugal love doesn’t possess a light version. It comes from God, infinite love, and we are called by God, to aim for the summit.