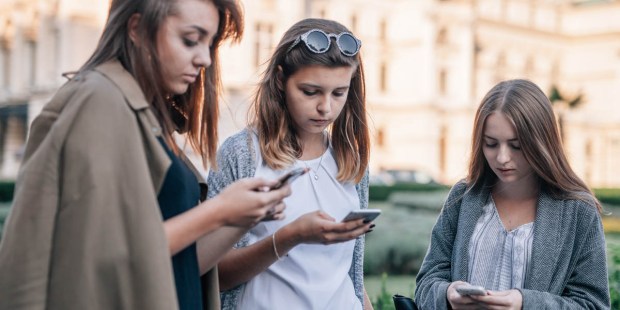 Almost all teenagers have access to a mobile device, according to Pew survey.

Nearly half of all teens report being constantly online, and nearly all own or have access to a smartphone, a new study finds.

Though adults may believe otherwise, 45 percent of teens surveyed believe the use of digital technology and social media have neither a positive nor a negative effect on them.

“Meanwhile, roughly three-in-ten teens (31%) say social media has had a mostly positive impact, while 24% describe its effect as mostly negative,” a summary of the survey said.

Teens who say social media has had a mostly positive effect tended to stress issues related to connectivity and connection with others; greater access to news and information; being able to connect with people who share similar interests; the entertainment value; the fact that it offers a space for self-expression, or that it allows teens to get support from others or to learn new things in general.

Young people who opine that social media has had a mostly negative effect on people their age cite reasons such as the fact that it has led to more bullying and the spread of rumors.

Social media “gives people a bigger audience to speak and teach hate and belittle each other,” said a 13-year-old boy.

Nearly one out of five kids (17 percent) feels that social media platforms harm relationships and result in less meaningful human interactions, according to the findings. Fifteen percent think social media distorts reality and gives teens an unrealistic view of other people’s lives, while fourteen percent believe that teens spend too much time on social media.

”It makes it harder for people to socialize in real life, because they become accustomed to not interacting with people in person,” observed a 15-year-old girl. Teens “would rather go scrolling on their phones instead of doing their homework, and it’s so easy to do so. It’s just a huge distraction,” added a boy of 17.

Experts have long warned about deleterious effects on young people from their use of smart phones and social media. One of the most prominent critics, Jean Twenge, just published a study suggesting a link between these practices and depression. Twenge, Professor of Psychology at San Diego State University, recognized that the rise of the smartphone among teenagers coincided with the rise of teens’ feelings of uselessness, as well as with the fall of their satisfaction and happiness, according to the Harvard Gazette.

“The largest change and most pervasive change in teens’ lives was more smartphones and more time on social media,” she said. Smartphones had disrupted the majority of teens’ lives, including time they used to spend socializing in person and sleeping.

Twenge is author of iGen: Why Today’s Super-Connected Kids Are Growing Up Less Rebellious, More Tolerant, Less Happy — and Completely Unprepared for Adulthood — and What That Means for the Rest of Us.

But there may be good news as well. Research on younger kids—9- and 10-year-olds—suggests that greater social media use, such as scrolling through Instagram and texting, was associated with some positive effects, including increased physical activity, less family conflict and fewer sleep problems, according to a report at National Public Radio. The Adolescent Brain Cognitive Development study, a project of the National Institutes of Health, found that children who used social media still participated in more traditional forms of screen time. “But the time they spend interacting with others through social media, texting or video chatting outweighed TV, video games and internet time,” NPR said.

As for the Pew survey, it found other surprising results as well: In an earlier survey, in 2014-2015, Pew found that 71 percent of teens reported being Facebook users. No other platform was used by a clear majority of teens at the time: Around half (52 percent) said they used Instagram, while 41 percent reported using Snapchat. This year, however, Facebook’s popularity has dropped to 51 percent, while more and more teens are enjoying YouTube, Instagram and Snapchat.

“It is clear the social media environment today revolves less around a single platform than it did three years ago,“ the survey concluded.