Philippines’ President Duterte: “who is this stupid God?” 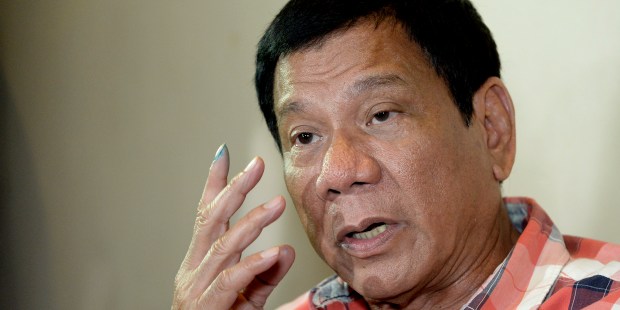 Remarks are latest to rile the Catholic Church

Philippines President Rodrigo Duterte has once again drawn criticism for his remarks seen as confrontational towards the Catholic Church. In a speech on Friday, he questioned the Creation story and the doctrine of original sin in the Bible, saying, “Who is this stupid God?”

His remarks elicited criticism from Catholic leaders and some of his own allies, according to a CBS News report.

“Duterte’s tirade against God and the Bible reveals again that he is a psychological freak, a psychopath, an abnormal mind who should have not been elected as president of our civilized and Christian nation,” said Bishop Arturo Bastes, according to the report.

Sen. Panfilo Lacson, a former national police chief and supporter of Duterte’s policies, criticized the president for speaking against God “to whom I pray every single day and with whom I’ve found solace and comfort in all my difficult times, I don’t even have to think of my choice.”

“May my God forgive him and make him atone for all his sins,” Lacson said.

In the televised speech, Duterte said, “Who is this stupid God? This son of a b**** is then really stupid,” according to CBS’s translation of his remarks.

He also questioned the Christian doctrine of original sin. “You were not involved but now you’re stained with an original sins … What kind of a religion is that? That’s what I can’t accept, very stupid proposition,” he asked.

Duterte has had a strained relationship with the Catholic Church, whose leaders have criticized his the extra-judicial killings that have marked his war on drugs.

In the last six months, three Catholic priests have been murdered in the Philippines. In response to accusations in the media that his past anti-clerical remarks may have incited violence against the clergymen, Duterte lashed out against the victims.

“If you are a priest, and you have an affair with the wife of a soldier or a mayor, you will really die,” said Duterte, according to a report in ABS-CBN News. He also said that priests are “no better than me,” adding, “some priests have two wives.”