Step back in time: Listen to the music of ancient Greece 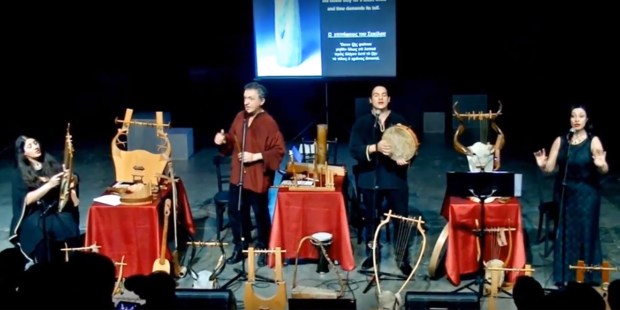 A musical family has recreated ancient music based on 60 musical scores that still exist from thousands of years ago.

Using replicas of instruments used in ancient Greece, a family of musicians gave the audience at Athens’ Archaeological Museum on Thursday a sense of what Greek antiquity actually sounded like, according to a report in Reuters.

In order to recreate the music that the ancient Greeks played thousands of years ago, the group, which calls itself Lyravlos, fashioned instruments out of animal shells, bones, hides and thorns.

According to Reuters, Panayiotis Stefos, who leads the group, “travels to museums at home and abroad studying ancient Greek antiquities and texts in order to recreate the instruments.”

As for the music itself, there are only about 60 written scores from ancient Greece that have survived, Lyravlos member Michael Stefos told Reuters.

“Joking aside, ancient CDs have never been found,” he said.

Watch this video of a previous performance of Lyravlos recreating the music of ancient Greece:

In ancient Greece, most the music would have been played at religious, social and athletic events. The audience at the performance, which was held as part of World Music Day celebrations, was treated to a hymn to the god Apollo, music from the ancient Pythian Games in Delphi, and selections that would have been played during the bacchanalia honoring the god Dionysus, reported Reuters.

To read the rest of the Reuters’ story and see pictures of the performance, click here.