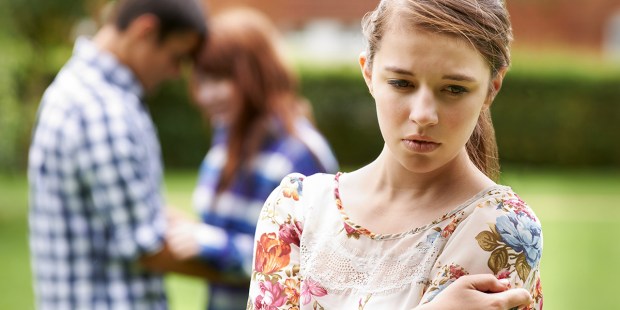 Here’s how to accept those uncomfortable emotions and move on.

At Camp Gladiator, one of our mottos is #bettertogether. This means we trainers work as a team, and when we sign a camper up we let them choose the location that they think will work best for them.

It’s a great model because it genuinely promotes team-building. But I’m not gonna lie, when a camper chooses another trainer over me it stings a little — even though I know and love all the amazing trainers on our team. No one likes rejection, whether it’s a job interview or a first date. But it turns out that some rejections — or specifically, one type of rejection — hurts worse than others.

According to Ladders, we tend to feel the sting of rejection harder and longer when it’s accompanied by a comparison to another person, rather than being a flat-out no.

A recent study published in Personality and Social Psychology Bulletin found that when a rejection makes a comparison between you and another person, we will feel the lingering sting of that slight far more than a flat-out no.

To prove this, researchers recruited more than 100 participants and split them into teams of three in which they were told that they would be completing brainteasers to test how groups worked together. The catch? In each trio, there were always two people in on the plan, who followed the researchers’ instructions on how to act. In half of the groups, the unwitting third party had to watch the other participant choose to work with the second person over them. In the other half, one of the actors would simply choose to work alone over working with the others. The participants who had to watch two others team up without them reported feeling much higher negative emotions of sadness and anger and disliked the rejector much more than those who just watched the rejector be a loner.

This is interesting on several levels, and it tells us a lot about the human need for belonging. First, whether it’s a job rejection, a date rejection, or a friendship rejection, we always know subconsciously that the whatever place we wanted to have is eventually going to be occupied by someone else. If it’s a job, you know that you’re being rejected because you lack something the employer is looking for. And even if the job stands open for a while, eventually it will be filled by someone who has what you lacked.

Same with any kind of relationship — either you don’t have what the other person is looking for, or you have something they’re not looking for. And someday, you know they’ll find a person who has what they want.

But our minds don’t usually dwell on the nebulous, future person who will take the place we wanted. That’s a long stretch for our imagination to go, and it’s usually pretty consumed with feeling bad about being rejected at all. However, if the person who does fit the bill is right in front of us, it’s impossible to ignore the accompanying sting of envy, hurt, and exclusion.

One of the traits that has evolved to be hard-baked into the human psyche is the need to belong. This is what allowed us to develop stable societies and advance as a civilization — but it also makes the sting of rejection that much more painful. We need to belong in a deep, primal way, and a rejection accompanied by a comparative judgment (this person is better than you) is a direct assault on that need for belonging.

On the one hand, there’s not much we can do about this. It’s just part of life. On the other hand, we can take active steps to protect ourselves from worsening the sting of rejection. If it’s a job you’ve been rejected from, deny the impulse to try and hunt down the person who did get the job (or if you know, try not to compare yourself to them). In the end, the job wasn’t right for you as much as you weren’t right for it, so console yourself with the knowledge that when the right job for you comes along, you’ll be the only choice.

Same with relationships. Don’t stalk your ex across social media and dwell on pictures of them with their new flame — it will only make you feel worse and prevent you from healing and moving on to find the person who’s right for you. Remember that you have unique gifts, talents, and qualities that will be universally attractive to the person who is best suited for you … and then be patient! Better to wait for the right fit, with a job or a person, than to force yourself into a position that’s not right for you.

Read more:
When fear of rejection is more than it appears