Could Chesterton, inspirer of popes, soon be beatified? 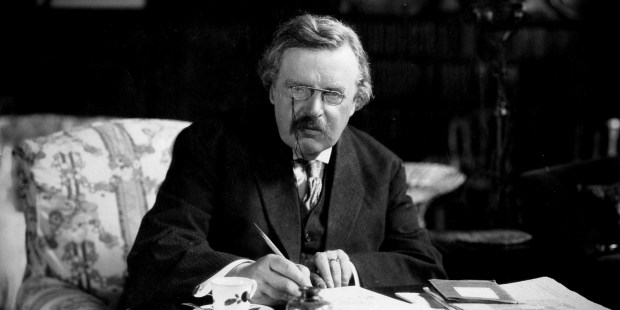 The cause of beatification of the British writer may soon enter its Roman phase. His writings do not leave anyone indifferent, not even the popes.

Asceticism was not Gilbert Keith Chesterton’s forte. A great drinker, perhaps even gluttonous, he loved feasting. It is therefore not this aspect of his life that would weigh in favor of his eventual beatification. And yet, for many, there is no doubt that the prolific writer lived a life close to the heart of the Lord. According to the president of the American Chesterton society, Dale Ahlquist, his works contributed to the conversion of CS Lewis, who wrote The Chronicles of Narnia; of JRR Tolkien, author of Lord of the Rings; and of the Argentine poet Jorge Luis Borges.

He himself converted from Protestantism 10 years before his death. His thought, reconciling faith and reason, would lead him to be named a defensor fidei— defender of the faith— by Pope Pius XI. His writings have even been a source of inspiration for Pope Francis, who has quoted him in a homily at St. Martha. The Supreme Pontiff noted “that heresy is a truth gone mad.”

When he was Archbishop of Buenos Aires— and at that time also a member of the Chesterton society in Argentina—the future Pope Francis recommended opening a beatification process for the British writer. This, in fact, was done in 2013, at the initiative of the Bishop of Northampton, Peter Doyle.

Evangelii Gaudium (“The Joy of the Gospel”), the title of Pope Francis’ first apostolic exhortation, also recalls the conclusion of one of Chesterton’s major works, Orthodoxy: “Joy is the prodigious secret of the Christian.”

This is not the only link between Chesterton and a Supreme Pontiff, according to the Italian religion teacher Andrea Monda. “Neither Chesterton nor Benedict XVI are intellectuals who are content with paradoxical sentences, jokes, or puns,” he said. “Their reasoning is aimed at dialogue, the search for a relationship with others, even with those who are far away, who do not believe, who are ‘enemies’ of the faith.” And they did this without “betraying their adherence to the faith that is above all lived, practiced, and then preached.”

More than 80 years after his death, GK Chesterton may be on the verge of obtaining the ultimate recognition of the Church. An initial diocesan inquiry should close in a few weeks, according to Ahlquist, with the bishop then taking a consultation on opening a cause to Rome.