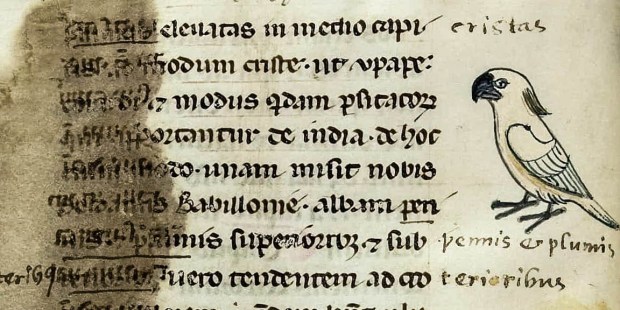 The illustration was penned by the Holy Roman Emperor’s own hand.

Finnish researchers were poring through a Vatican-owned manuscript written by Emperor Frederick II in the 1240s when they discovered an illustration of the Australasian cockatoo. The presence of such an exotic bird in a European work has caused experts to rethink what they knew of medieval maritime trade routes.

The Guardian explains that while the exact species of cockatoo is unknown, it is either a sulphur-crested cockatoo, a yellow-crested cockatoo, or a Triton cockatoo. All of these birds would have only been found on the northern tip of Australia, New Guinea, or the islands surrounding New Guinea. No matter which type of cockatoo it is, its presence in the manuscript suggests that trade was flourishing in the Australian region as far back as the 13th century.

Scholars now believe that a trade route existed between this region and Egypt, where the bird was shipped and acquired by the Egyptian sultan, al-Kamil, who then presented it to Frederick II as a gift. The cockatoo then became part of the Holy Roman Emperor’s extensive collection of exotic beasts and birds.

Experts were able to identify the bird as female, based on the red paint used for itss eyes. Female cockatoos have red eyes, while the male’s are black. The cockatoo was also drawn with its crest down, suggesting the bird felt safe while it was being drawn and was well cared for.

Previous to this discovery, the oldest depiction of a cockatoo in European art was believed to be from Andrea Mantegna’s 1496 altarpiece Madonna della Vittoria, which now hangs in the Louvre Museum, Paris.

Dr. Heather Dalton, a historian at the University of Melbourne, and the leading expert on cockatoos in medieval European art, was thrilled by the find and spoke about the importance of the discovery:

“The main significance about it is we tend to think of our region, not just Australia, but the islands around it, as the very last things to be discovered; the European view is it’s almost this dead continent and nothing was happening until Europeans discovered it.

“The fact that a cockatoo either from the northern tip of Australia, or from New Guinea or the islands around it, was traded to Cairo and on to Sicily is significant. It’s a window in on what I think was quite a vibrant trading network.”