No apology from Duterte over “stupid God” remarks 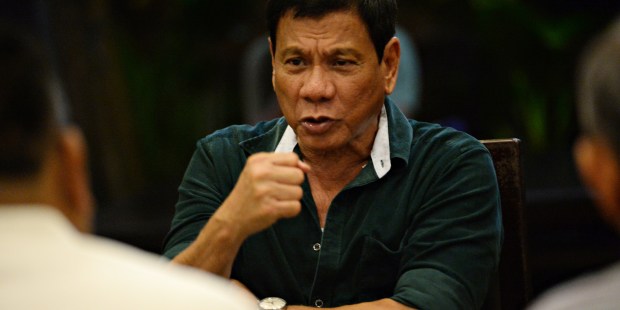 The president of the Philippines will not be apologizing for remarks many Christians consider insulting to God, but the cardinal who leads the Church in Manila is appealing to believers to take a measured view of the controversy, suggesting that it is distracting attention from more important issues.

A spokesman for President Rodrigo Duterte on Wednesday rejected the suggestion of a prominent Christian evangelist that Duterte apologize to God in public for calling Him “stupid.”

In a speech last Friday, Duterte, who has clashed with the Catholic Church on other occasions, especially over his ordering of extrajudicial killings in a war on illicit drugs, questioned the Creation story and the doctrine of original sin in the Bible, saying, “Who is this stupid God?”

Duterte also blasted the creation story in the Bible and questioned the characters in the Last Supper and called them “idiots.”

Though an apology apparently is not forthcoming, Duterte on Monday seemed to be trying to explain himself.

“What I said was your God is not my God, because your God is stupid. Mine has a lot of common sense,” he said.

“Be at peace. Be calm. Don’t let things disturb your inner peace. Let us read the situation with the eyes of faith,” Cardinal Tagle said in a letter to priests in his diocese.

He even seemed to give the president the benefit of the doubt, saying the matter of questioning God and His ways was “as old as humanity and religions.”

While it may be important to defend the Church, Cardinal Tagle called on people “not to be distracted” from important issues, such as inflation, unemployment, corruption, and the continued killings.

He lamented the worsening traffic in big cities, flooding, exploitation of women and children, the vulnerabilities of Filipino workers abroad, and terrorism as among the problems besetting the nation, according to the website of the Philippines Bishops’ Conference.

“We need to come together and contribute to positive responses according to each one’s capability. We cannot address these problems by just blaming someone,” he said.

He urged the faithful to harbor no grudge and to remain firm in their faith.

“The criticisms of Duterte against the Church are diversionary tactics to cover the failures of his administration,” he said.

Archbishop Jose Palma of Cebu called Duterte’s rant “out of tune,” but appealed to the faithful to pray for the president’s enlightenment, according to Asia One. “We hope he will realise that what he is doing does not present a good picture of him,” Archbishop Palma said.