Prince William visits the tomb of Christ in Jerusalem 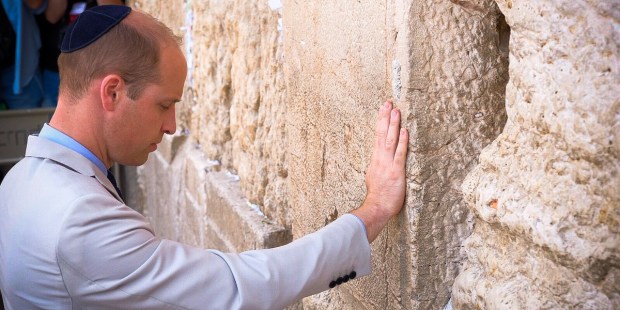 Trip marks first official visit of a British royal since 1948

On the first official visit to the Holy Land by a member of Great Britain’s Royal Family since 1948, Prince William, Duke of Cambridge, reportedly prayed “for a long time” in the Basilica of the Holy Sepulcher.

The junket ruffled feathers in Israel because the Prince’s program referred to the “occupied Palestinian territories.” Much of the world does not recognize Israel’s sovereignty over the eastern part of Jerusalem, which Palestinians hope will become the capital of a future state.

But he also visited the Holocaust Memorial, Yad Vashem, and the Western Wall, the holiest site where Jews can pray. After standing for a few minutes in contemplation, his hand touching the wall, he signed the guestbook: “May the God of peace bless this region and all the world with peace,” according to the Jerusalem Post.

The Duke of Cambridge visits the Western Wall.

On Thursday, the Duke of Cambridge began his visit of Jerusalem by contemplating the old city from the Mount of Olives, reported the website of the Latin Patriarchate of Jerusalem. Afterwards, he visited the Al-Aqsa mosque compound.

At the Basilica of the Holy Sepulcher, which is built on the traditional site of the Crucifixion and Resurrection of Christ, he was greeted by a delegation of Church representatives. Accompanied by Bishop Suhail Dawani, Anglican Bishop of Jerusalem, Prince William spoke with Greek Orthodox Patriarch Theophilus III, Armenian Patriarch of Jerusalem Nourhan Manougian and a Franciscan friar representing the Custody of the Holy Land.

After entering the church, Prince William knelt down and placed his hand on the Anointing Stone, where tradition says Jesus’ body was prepared for burial. He entered the tomb, the place of the burial and the resurrection of Christ, where he prayed for a long time, according to the Latin Patriarchate. After a tour of the church, he took the stairs leading to Calvary, where he lit a candle.

While in Jerusalem, Prince William also lay flowers on the grave of his great-grandmother, Princess Alice of Battenberg. Alice, who was Queen Elizabeth’s mother-in-law, is buried in a crypt in the Russian Orthodox Church of Mary Magdalene on the Mount of Olives, according to the Jerusalem Post. “A devout Christian, she died in London in 1969 and had asked to be buried in Jerusalem, next to her aunt, who like Alice had become a nun and founded a convent,” the paper said.