Who is the whore of Babylon from Revelation? 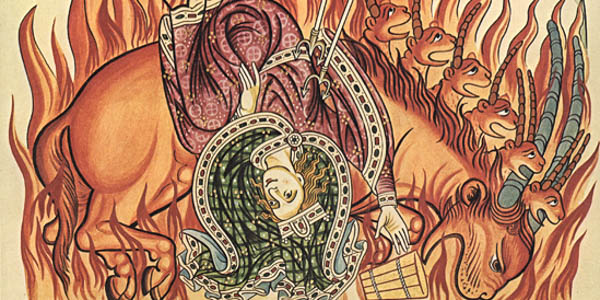 That great destroyer of hope in the efficacy of Christ’s victory calls us to look beyond her.

“Come, I will show you the judgment of the great whore” (17:1). With this, Revelation introduces us to the figure of a woman “with whom the kings of the earth have committed fornication, and with the wine of whose fornication the dwellers on earth have become drunk” (17:2). But just who is this harlot? The Catholic Church, of course! Well, at least that’s what half the vitriol on YouTube would have us think. Thankfully, there’s a more intelligent reading, and one that is much richer as well.

In the Book of Revelation, John concludes his visions with an account of “the holy city, the new Jerusalem, coming down out of heaven from God, prepared as a bride adorned for her husband” (21:2). This, the eventual and lasting refuge of the faithful, is the counterpart and foil to “the great city” (18:10) who now lords over the persecution of the faithful. Of this, the whore—the one “drunk with the blood of the saints and the blood of the martyrs of Jesus” (17:6)—is an image. As John himself makes clear, “The woman that you saw is the great city which has dominion over the kings of the earth” (17:18).

But what city is “the great city”? Who is “Babylon?” There is much in the Book of Revelation to suggest Rome. After all, who else but the imperial city can be said “to have dominion over the kings of the earth”? And after the persecutions of the first century under Nero and Domitian, who better to describe as “drunk with the blood of saints and the martyrs of Jesus”? There is also the remark that seems to place the great city on the traditional seven hills of Rome. The heads of the dragon on whom the woman rides “are the seven high hills on which the woman is seated” (17:9). And of course, there is the precedent, within the New Testament itself, of speaking of Rome under the figure of “Babylon” (cf. 1 Pet 5:13).

Even so, there is much to suggest another reading. “The great city” is said to be the place “where their Lord was crucified” (11:8). So too was it the place of the prophets’ persecution (18:24). Without question, this is Jerusalem! And if we recall the likes of Sts. Stephen and James, we might speak of her streets as “drunk” as Rome’s. The city’s destruction does, moreover, seen to be “soon” (20:6-12), a possible reference to the fall of Jerusalem in the year 70. Last of all, it just seems fitting that the “heavenly Jerusalem” should find its counterpart in the earthly Jerusalem.

The argument for both is convincing. That, though, might well be the point. “Apocalypse”—the genre of writing we find in the Book of Revelation—trades heavily in images. And while these images do act as a cipher for specific historical realities (Rome, Jerusalem), so too are they meant to embrace future referents. Before the coming of that “holy city, the new Jerusalem,” there is no shortage of people or places the exercise of whose power leaves the faithful crying out “O Sovereign Lord, holy and true, how long before thou wilt judge and avenge our blood on those who dwell upon the earth?” (Rev 6:10).

Perhaps, then, the most meaningful way to understand the whore and the great city she represents is to see her as what Augustine calls “the city of man.” The role of the whore of Babylon is above all else to oppose the Lamb. Babylon stands for one whose power seems determinative of everything, whose rule strikes one as inevitable and wholly irresistible. She is the one, in any age, who asserts dominion and who, for the sake of her own glory, configures the world in her own image. Otherwise said, “Babylon” is everything that destroys hope in the efficacy of Christ’s victory, everything that leads the faithful to despair of following the lamb “wherever he goes” (14:4).

It is, however, the lamb, “standing as though slain” (Rev 5:6), that Revelation means most for us to consider. The woman—brazen, drunk, and doomed—merely makes visible what Simon Tugwell calls “the omnipotent weakness of God.” The lamb who has died “is alive forevermore” and alone “holds the keys to Death and Hades” (Rev 1:18). By calling the woman and the great city “Babylon,” John means to cast her in the role of Israel’s great historical enemy. In doing so, however, he speaks not only to the terror of what she inflicts but so also her inevitable downfall. Babylon is the name of the defeated. It is the name of what appears invincible but passes in a moment. “Alas! alas! thou great city, thou mighty city, Babylon! In one hour has thy judgment come” (Rev 18:10).

Who then is the whore of Babylon? There are many answers, and more yet to come. John shows us what is common to each and, most importantly, he shows us the one who, in every instance, is the cause of Babylon’s fall—Christ, the lamb standing as slain.