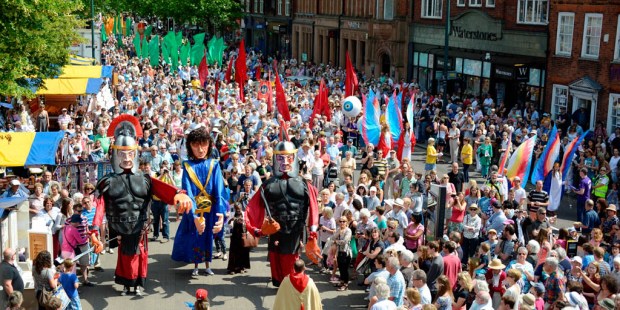 Mystery plays, pilgrimages and Marian processions are making a comeback in an era where the visual has gained prominence.

Whether it’s being done for evangelistic purposes or to boost the coffers of struggling churches, several Anglican cathedrals in England are reviving practices that had been abandoned since the Reformation.

One is even holding processions in honor of the Blessed Virgin Mary.

British cathedrals are “transforming their genteel image with bright color, noisy processions and drama, reviving long-abandoned practices from the middle ages and drawing in the crowds,” reported the Guardian.

Those “long-abandoned practices” include medieval mystery plays, which were once common features in Christian villages throughout Europe as a way to teach the faith to a largely illiterate populace.

Their revival comes at a time when Europe has one of the lowest rates of Christian adherence in centuries, as well as at a time when smart phone use is at an all-time high.

“We have returned to a very visual culture today, and medieval practices suit that,” said Jeffrey John, the dean of St. Alban’s Cathedral in Hertfordshire who created a modern-day pilgrimage to honor the first Christian martyred in Britain. “And if you have strong medieval roots as so many cathedrals do, you are bound to probe them and revive that heritage.”

Thousands attended the St. Albans pilgrimage last Saturday, witnessing a retelling of the 1,700-year-old story of the martyr with the help of 12-foot-high puppets of St. Alban, Roman soldiers, lions and charioteers.

Jane Brooke, acting dean of Chester Cathedral, agrees that medieval practices work in the 21st century because of the dominance of visual culture, the Guardian noted. Brooke oversaw a new production in the nave of the cathedral of 24 medieval mystery plays, which once served to teach the faith to crowds in outdoor festivals. The new production, “The Chester Mystery Plays,” condenses the 24 into one. It was fashioned by veterans of television soap operas and began an 18-day run this week.

“We have to assume no prior knowledge of Christianity,” said director Peter Leslie Wild, who has directed episodes of The Archers, the world’s longest-running radio soap opera. “This is an interpretation for a modern audience, rooted in contemporary life and performed by local people, just as they would have been in the middle ages.”

“One new twist in this year’s plays is the focus on the destruction of God’s creation by humanity, with the stage awash with plastic following the flood, when Noah saves animals in his ark,” the Guardian said.

And financial considerations are not insignificant, as the newspaper pointed out:

The revival of practices abandoned because of the Reformation and Puritan influence is highly appealing to many Anglican cathedral deans facing huge costs to keep their ancient buildings in good order. At next month’s General Synod, the Church of England will discuss a report from the Cathedrals Working Group about financial management of cathedrals and to urge the government to establish a cathedral fabric fund to support conservation and restoration programs.

Finally, even a practice considered more Catholic than Anglican is gaining favor: Lincoln Cathedral, which is dedicated to the Virgin Mary, now has Marian processions on her feast days.

The revival of medieval practices might just remind some people that England was once a Catholic country.