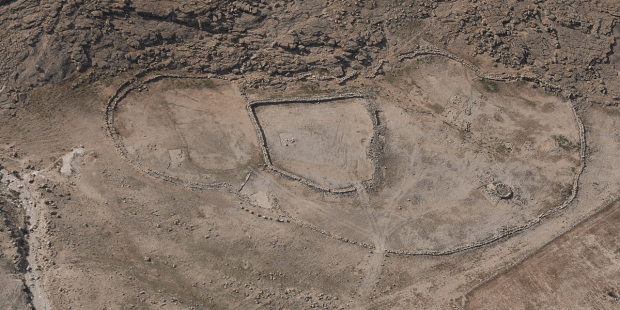 They are believed to be cultic in origin, but none can say for sure.

For decades, archaeologists have been trying to determine an explanation for the mysterious “Israelite footprints” that were discovered in the Jordan Valley. Dated between the 12th and 13th centuries BC, these large foot-shaped enclosures dot the arid landscape and have perplexed experts.

The “footprints” were initially discovered by the late archaeologist Adam Zertal, who found half a dozen such sites while surveying the Manasseh Hill Country. They vary in size; for example, el-’Unuq, measures 816 feet long and 228 feet wide, while another site, Bedhat esh-Sha’ab, only spans 3 acres. The shape of these sites is not determined by terrain, as they have been dug into the earth where needed.

The most famous of these footprints — or gilgalim — is found on Mt. Ebal. Zertal excavated this site through much of the 1980s and uncovered a large stone altar built from unhewn stones, which was dated to the Iron Age I. Biblical Archaeology describes the site:

The earlier level was built on bedrock and had a depression in its middle. Charred animal bones and ash were found inside this depression. Belonging to the later level was a monumental altar, measuring 23 by 30 feet and 10 feet tall, with a 23-foot long ramp leading up to it. This altar was filled with bones, many of which had been burned, ash and Iron Age I pottery.

After extensive examination of the site, Zertal identified it as cultic in nature and came to a controversial conclusion that the alter he found was the very same altar was referred to in Joshua 8:30. There has been much criticism of this theory from fellow archaeologists, best summarized by Israeli archaeologist Amihai Mazar, who wrote, “Zertal may be wrong in the details of his interpretation, but it is tempting to accept his view concerning the basic cultic nature of the site and its possible relationship to the biblical tradition.”

The other similar sites have also led to confusion, as they did not contain the same evidence of human activity as Mt. Ebal. The lack of pottery and buildings at these sites might suggest that they were used to hold animals, however Ralph K. Hawkins, Associate Professor of Religious Studies at Averett University, has ruled this theory out based on the grand size and high-quality of construction.

Hawkins concluded that these sites are “unique and appear to have been built by semi-nomads who used a pottery repertoire similar to that of the new population group that entered Canaan from the east at this time [Iron Age I].”

The Bible refers to at least three, and possibly five, different locations as “Gilgal” … Most of these gilgalim … appear to have had a cultic function. One gilgal served as the site of the circumcision of the generation of Hebrews born during the wilderness wanderings as well as their celebration of the Passover (Joshua 5:2–11). Another gilgal was located near Mt. Ebal and Mt. Gerizim, where the Israelites renewed their covenant with Yahweh in the midst of the settlement (Deuteronomy 11:30).