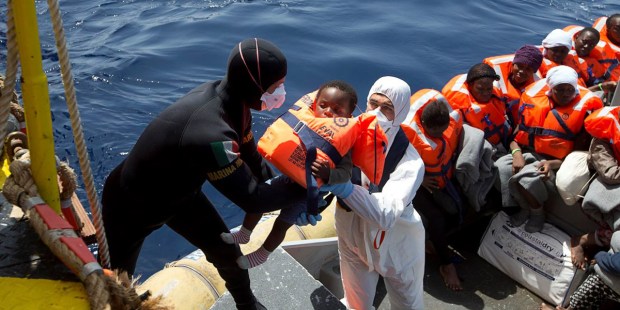 An inflatable dinghy carrying up to 125 migrants capsized off the coast of Libya Friday, leaving several children drowned and about 100 persons missing.

The bodies of three babies were recovered after the migrant boat sank, according to the Telegraph. Survivors were brought ashore in Al-Hmidiya, east of the capital, Tripoli.

Libya is the main departure point for most migrants trying to reach Europe, the newspaper noted. More than 1,000 people have drowned or gone missing in the Mediterranean already this year.

Friday’s tragedy transpired in the wake of a compromise worked out by European Union leaders over the issue of migration. The New York Times reported that details were sketchy, but the leaders agreed in principle on “how to shore up their external borders and create screening centers for migrants, to decide more quickly whether or not they are legitimate refugees.” Some of those screening centers would be outside Europe, perhaps in North Africa, to screen migrants before they arrive. That is out of a hope to reduce the number of migrants who risk the sea voyage and to disrupt people-smuggling operations. “Those rescued at sea could be returned to those centers for screening, not brought to Europe,” the newspaper reported.