Another holy woman who lived on only the Eucharist: Maria Domenica Lazzeri 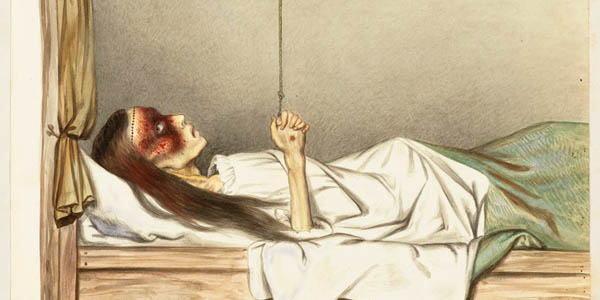 Sometimes God ignores the laws of his own creation, for his glory and our faith …

Maria Domenica Lazzeri was born in Capriana, Italy, on March 16, 1815. She was the youngest of five children born to Margaret and Bartolo Lazzeri, who was a miller by trade. However, Bartolo died in 1829 from pneumonia. The loss of her dad had a profound effect on his youngest child.

Maria’a childhood had been peaceful and uneventful up until her dad’s passing. People said that it was from that point on that Maria’s health began to deteriorate, and her mystical journey began. Unexplained physical illnesses seized hold of her, and she quickly became weaker. At the same time, her spirituality began to intensify.

During her early teen years, her love and compassion for the sick and suffering were pronounced. She prayed and fasted, and during a time when epidemics were common, Maria would help anyone who was sick and needed her assistance, without regard to her own health.

When Maria was 17 or 18, the entire region was infected with what was called “the grippe.” (When we were kids the flu was called the grippe.) People who survived seemed to recover within a week or two. This was not true for Maria. The young woman was constantly ill for over a year and, in spite of that, she spent countless hours helping take care of local families

Maria had a love for reading about the lives of the saints. She especially loved to read the works of St. Alphonsus de Liguori, but most of all she would absorb herself in the accounts of the Passion and death of Jesus.

On August 15, 1833, when Maria was 19 years old, she was ordered to bed as the doctors thought the “grippe” had once again attacked her. But this was not the case. Maria would be bedridden from this point on, for the rest of her life. From that day forward, Maria began suffering greatly. She received the stigmata, the wounds of Christ, and could not sleep or eat and drink. The only thing she could partake of was Holy Communion.

Maria Domenica Lazzeri, until her death 14 years later, lived bedridden and immobilized. Her hands, her feet, and her ribs displayed deep wounds. There were wounds surrounding her head similar to thorn-like punctures. Maria suffered through the Passion of Christ every Friday, sweating blood and having blood pour from her hands, feet and side. Her face would be bloodied from the dripping “thorn” wounds and she, in effect,  experienced a near-death experience every time she endured all this for Jesus.

Besides the stigmata, it was recorded that on a day in October of 1935, Maria suddenly vanished from her bed. Maria was completely paralyzed and, just like that, she was gone. They searched everywhere in the house for her but to no avail. She was gone.

Read more:
5 Saints who could bilocate

Eight and a half days later, Maria suddenly reappeared in her bed lying in the same position she had been when last seen. This was not simply about bi-location, this was also about actual “disappearance.” Her pastor recorded that Maria had been transported by angels over vast spaces filled with mountains and valleys and visited her sister stigmatists, Maria von Morl and Kreszentia Nierklutsch. With God all things are possible.

Maria Domenica Lazzeri, according to physicians’ reports, ate nothing for the last 14 years of her life. Her only ingested sustenance was the Holy Eucharist.

Files were lost or misplaced during World War II that pertained to Maria’s cause for sainthood, putting the process on hold. But much has since been recovered, and in 1995, her cause was again opened. She has been declared a Servant of God and the cause for her “heroic virtue” is being examined.

Servant of God Maria Domenica Lazzeri, please pray for us.

Read more:
Marthe Robin: Her only sustenance for more than 50 years was the Holy Eucharist