What we miss skipping from Christmas to Good Friday 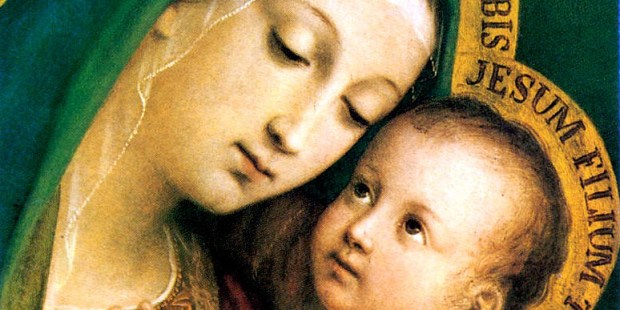 Let’s take a moment with Mary to stare at those tiny chubby fingers and the adorable little toes.

There is so much that is beautiful about the liturgical year, about the seasons that draw us more deeply into the mysteries of our faith. But the focus that Advent and Christmas put on the early life of Christ can sometimes leave us meditating on Jesus’ childhood for a few weeks and then putting baby Jesus away alongside fragile ornaments and hopelessly tangled Christmas lights. We condense his infancy into 12 days, nod to his boyhood for one Gospel reading, and then vault into the baptism.

But occasionally, a feast day reminds us that his childhood was as long as anyone’s. Last Sunday, we celebrated the birth of St. John the Baptist, Jesus’ cousin who was six months older than him. Here, we’re given a reminder that 2018 years ago (give or take), Mary was three months pregnant. She was just moving into her second trimester and looking forward to feeling the tiny flutters of God’s kicks in her womb. (We might sympathize with that yearning and wondering and waiting to feel God move, we who spend our lives trying to follow a God who rarely leads in pillars of fire and pillars of cloud and speaks most often in a still, small voice.)

Some 2017 years ago, baby Jesus was six months old. He was starting to sit, though wobbly, and thinking about crawling. And just like every mother, Mary stared at him in wonder. She watched for his first tooth and waited for his darling babbles to become a discernible “Mama.” As she nursed him to sleep, he groggily grabbed at her hand and she found herself staring at his tiny chubby fingers, those fingers that formed the stars and hung them in the sky. She reveled in his elbow dimples and wondered if any child had ever giggled as delightfully as he.

Some 2016 years ago, he was earnestly exploring the world he had made, taking cautious steps on cobblestones and putting his sticky hands all over everything he could reach. He was stringing together words and making sweet baby jokes and his mother, like every mother, was captivated.

The next year, Mary was trying to keep up with a full-fledged toddler, as he ran wildly in the direction of everything, climbing up steps and onto tables and generally making all the mischief he could. His knees were constantly scabby and his vocabulary was exploding. His mother couldn’t take her eyes off of him, for fear that he’d climb out a window and for love of his sweet grins and sleepy tears.

As he grew, she watched him begin to pray. She taught him his prayers and told him the stories of the patriarchs and prophets of old, but nobody could teach him to be still in the Father’s love, as he did even as a toddler. In this, as in all things, she was captivated by him.

This was more than just the mother of an only child tending in the direction of helicopter parenting. When Mary gazed upon her Son, she worshiped him. Even when he was out of sight, her heart pondered. She contemplated the wisdom revealed in the ancient eyes that shone out from his pudgy little boy face, the gentleness and reckless courage that he exhibited at play.

Read more:
The 6 things we’d have to change if we applied St. Benedict’s Rule to family life

Her eyes were fixed on him, as Hebrews tells us ours must be (Heb 12:2). Every moment of her life was about him, serving him, adoring him, seeking to know him better and love him more.

How many of us worship Jesus as Lord and Savior in a vague, God-is-my-heavenly-Grandpa kind of way, without really knowing him? If we reduce the incarnation to “was born of the Virgin Mary and became man. He suffered under Pontius Pilate,” leaving out the 33 years between the stable and the Cross, we might never really love him.

Mary, the first Christian and Mother of all believers, is a model for us in this. She could never have skipped from Christmas to Good Friday the way we so often do; her eyes were fixed on Jesus. She meditated on him day and night, pondering every detail of his life in her heart even as she went about her daily business.

She caught herself worshiping as the Word made Flesh struggled to write his first words. She stared at the scars on his carpenter’s hands, perhaps with an inkling of the holes that would mar and adorn them through all eternity. She ached for missing him after he left her at Cana. Her eyes were fixed on him.

It’s so easy to spend our prayer time asking God for things or thanking him for prayers already answered. But God is not our butler. He’s Lord and lover, Savior and friend. Standing beside the Blessed Mother, let’s begin to gaze at Jesus. Let’s imagine what he might have been like as a child and scour the Gospels for insights we’ve previously overlooked. With Mary as our model, let’s fix our eyes on him as we never have before.

… let us rid ourselves of every burden and sin that clings to us and persevere in running the race that lies before us while keeping our eyes fixed on Jesus, the leader and perfecter of faith. For the sake of the joy that lay before him he endured the cross, despising its shame, and has taken his seat at the right of the throne of God. …

Read more:
5 Spiritual lessons we can learn from little children