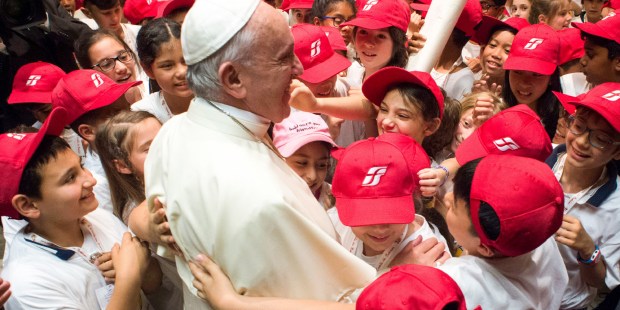 VaticanMedia-Foto I CPP
June 9, 2018 : Pope Francis meets the children during "The train of children" initiative organized by the Pontifical Council for Culture at the hall of the Paul VI Hall in the Vatican.
EDITORIAL USE ONLY. NOT FOR SALE FOR MARKETING OR ADVERTISING CAMPAIGNS.
Share
Print
Aleteia - published on 07/01/18

“Never forget the first teachers, never forget the school, because they are the roots of your culture. And remembering your teachers and your schools will help you not to be uprooted, and help you bear flowers and fruits,” was the message of Pope Francis to more than 500 children from various schools of the peripheries of Milan and Rome.

He spoke to the children at the Vatican in June for the “Treno Dei Bambini” (“Children’s Train”) initiative sponsored by both the Pontifical Council for Culture and the Italian Rail Network. This event is held annually as one of several activities organized as part of the “Courtyard of the Gentiles” outreach of the Vatican dicastery.

This year’s theme was “Friendly City,” in reference to the children’s dream of seeing their neglected and oftentimes dilapidated neighborhoods rebuilt.

In an atmosphere of joy and enthusiasm, the Holy Father began a spontaneous dialogue with them, responding to the curious questions posed to him by the children.

The first question addressed to the pope was asked by Ana Greta, who wanted to know whom the Pontiff had as his first teacher when he went to school.

“My first teacher was called Estela. She was very good, and taught us to read and to write. I had her as a teacher from the first to the third grade, and I have always remembered her, even after I finished school. I would call her on the phone when I was young and later as a priest, and then again as a bishop. I helped her during her illness. She died when she was 94 years old, and I always accompanied her. I will never forget those special memories,” the Bishop of Rome answered.

He counseled the children to always keep their first teachers in their hearts, “because they are the roots of your culture,” the first to teach us how to make progress on our own. Consequently, “remembering your school and teachers will help you bear good fruit in your lives.”

Read more:
10 Ways to teach children that less is more

The favorite games of Francis’ childhood

Another child asked the Holy Father what his favorite games were during his childhood. With enthusiasm, the Pontiff explained that he often enjoyed flying paper kites that he made with his friends. And then soccer, a sport he loved. “In my neighborhood, we organized soccer championships with all the children and also kite championships, to see who could build the prettiest and highest-flying kite,” the pope shared, adding that the carnivals in his neighborhood were also very nice at that time “because all the children would dress up in costumes and went out singing, and there was music, and we would even knock on doors and ask for sweets and chocolates from the neighbors.”

Understanding the call to his priestly vocation

Another child named Malak asked the pope how it was that he came to understand that he should live his life as he has lived it. “I understood it little by little, in stages, because before being a priest I studied chemistry and worked for four years as a chemist. While in college, toward the end of my studies, I worked in a laboratory and I liked it. But at a certain moment I realized that doing this wasn’t truly fulfilling me, so it occurred to me that I should do something to serve others, like being a doctor, for example. In the end, one day, on September 21, the beginning of spring in Argentina – the opposite season for you since here in Europe September 21 would be toward the beginning of autumn – I felt in my heart that I had to be a priest.”

“It was like a ‘boom’ – an unexpected blow. So I continued working for some time, but this conviction continued, so I later entered the seminary. It was a sudden thing, I felt the call all of a sudden,” the pope shared.

Drawings for the pope and wishes for a better neighborhood

The children shared with the pope posters, drawings, and models they had made in which they imagine their dream neighborhoods, proposing also some options that could help improve their neighborhoods, making them cleaner, safer, and with greener spaces.

The Holy Father thanked them for their artwork, and especially for their work in making them, “using their hands, hearts, and intelligence,” which, the pope said, “gives them profound and enormous human value.”

The Vatican’s “Children’s Train” initiative is celebrating its sixth year since its inception in 2013, bringing hundreds of children from disadvantaged areas to the Vatican to meet with the Holy Father.