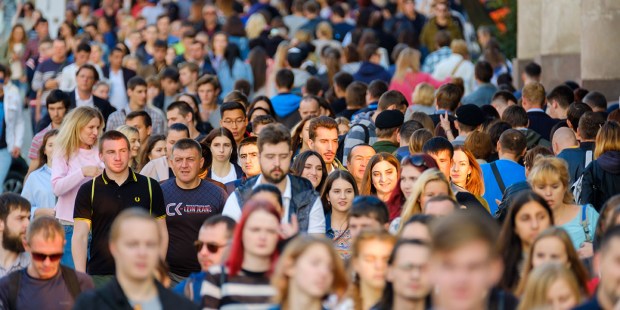 A drop in a nation’s fertility rate doesn’t just make it harder for the younger generation to care for an increasing elderly population. It also has an effect on the spiritual life of a nation, says a leading American historian.

Reports earlier this year that the fertility rate in the United States has dropped below the replacement rate has led Philip Jenkins to declare that the country has passed a “critical statistical landmark, one that I think—I fear—has immense implications for the nation’s religious life.”

“If I am right, and we are dealing with early days, we might seriously be looking at the opening stages of a large scale process of secularization,” Jenkins wrote in a blog post at Patheos.

Jenkins, Distinguished Professor of History and Co-Director of the Program on Historical Studies of Religion at Baylor University, explained that if a country’s total fertility rate—the average number of children that a woman bears in her life—is around 2.1 children per woman, the population will remain broadly stable. “That level is termed ‘replacement rate,’” he wrote. “A fertility rate below 2.1 results in contracting population and an aging society.”

Jenkins has argued that there is an inverse relationship between fertility rates and a society’s degree of religious fervor and commitment. “High fertility societies, like most of contemporary Africa, tend to be fervent and devout,” he observed. “Conversely, the lower the fertility rate, and the smaller the family size, the greater the tendency to detach from organized or institutional religion. That shift from high to low commonly takes place in a short time, a generation or so. Fertility rates thus supply an effective gauge of trends towards secularization.”

The prime example, for Jenkins, is Europe, which has become “so secular since the 1960s,” the same time frame in which it has trended towards “historically low fertility rates.” In Spain and Italy, for example, the fertility rates today are around 1.3 or 1.4. In some parts of Germany, they have gone as low as 0.8.

“The fertility rates of nations like France and Great Britain are higher, approaching replacement, but that is because of the high fertility of recent immigrants,” noted Jenkins, who is a native of Wales. He writes:

That demographic change has complex consequences for religious change, although there is no simple chain of causation. Nor is it easy to distinguish cause from effect. Declining fertility accompanies women’s emancipation and full-scale entry into the workforce, and commonly results from a decline in traditional religious-based concepts of gender roles. In turn, smaller families reduce their ties to organized religious institutions, as there are simply fewer children to put through religious school and First Communion classes. As religious ties diminish, ordinary lay people increasingly define their values in individualistic and secular terms, and are more willing to oppose churches on social and political issues of gender and morality. Even in once solidly Catholic countries, we see the advance of contraception, abortion, and same sex marriage, and a precipitous decline in church attendance and participation.

Jana Reiss, a senior columnist at Religion News Service, has a similar perspective. “The number of children a family has is related to the couple’s religious involvement—couples without kids are a bit less likely to be religious,” she wrote. “So the fact that fertility is on the decline is, again, worrisome news for organized religion. (To say nothing of the long-term implications for things like Social Security.)”

At one point, Jenkins said, he believed that religious life in the United States was relatively safe, and even when the fertility rate dipped below 2 in the early 2010s, he felt it was just a “statistical blip.”

“But it has never since returned above 2.0, and last month, the 2016 rate was announced: just 1.74, a very European rate,” Jenkins wrote. “The trend line is…pointing steeply downward. What we appear to be seeing is what secularization theorists have long argued. The U.S. is not essentially different from Europe, in religion or anything else. It is following the same path, albeit with a delay of some decades. The U.S. is a laggard, not an exception.”

“Fertility fell with the recession and had not recovered by 2015 when the fertility rate was 1.84,” reported Mark L. Gray, a researcher with the Center for Applied Research in the Apostolate at Georgetown University, in March. “Americans are having fewer and fewer children.”

Jenkins sounded a positive note, however, in that secularization does not simply mean the decline or death of religion or religious belief. European churches might be largely empty, except for tourists, but “a great many Europeans continue to show a potent interest in religious and spiritual affairs,” he said. “This is demonstrated especially by the vast and even growing popularity of pilgrimage across the continent, commonly to very traditional-seeming shrines associated with the Virgin Mary, and offering healing through faith. Supposedly secular Europe actually demonstrates a startling paradox of piety. But what we do undoubtedly see is the sharp decline of institutionalized religious practice, of traditional ideas of institutional and hierarchical religion, expressed for instance in respect for clerical power and regular religious practice.”