Are we really made for monogamy? 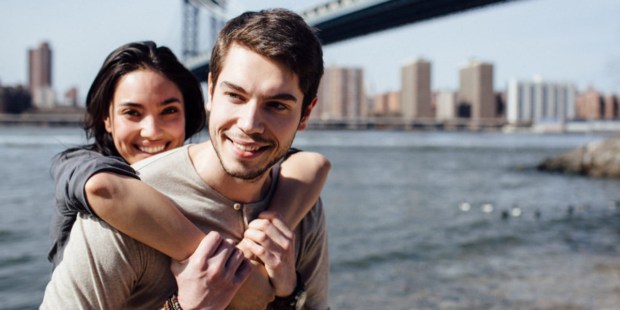 Reading and snowboarding aren’t “natural” either — but nobody suggests we get rid of them.

Every now and again we hear it, especially from those bent on exploring, debating, and “proving” that humans were never meant to be monogamous. The thought goes something like this: although sexual and marital monogamy may be best for kids and families, sexual monogamy is not natural. Humans, they say, were never meant to “mate for life.”

For those of us well-grounded in faith and in our relationships, this “proof” often garners more than a cursory eye-roll — after all, it sounds like the easy way out of a tough situation (and all relationships go through tough situations!). We wonder: why would our drives be so at odds with something that is best for us and our kids? For those of us who’ve experienced the benefits and joys of monogamy, it’s easy to see that we are meant for it.

Even still, the arguments against monogamy can be mildly persuasive if you start comparing human men to other males in the animal kingdom: always looking for healthy females to produce offspring with. And human women aren’t that much different from their counterparts in the creature world from a reproductive standpoint: females want robust males to provide their sturdy DNA along with some material support. David Barash wrote in Time, “it can be argued that a woman would be better off as the 20th wife of a very wealthy man than as the only wife of a pauper.” When you look at it this way, “polygamy,” at least biologically speaking, seems to satisfy the needs of both men and women.

Except, no. Not even close.

“Natural and worthwhile are not the same things,” writes Belinda Luscombe in a Time cover story titled, “How to Stay Married.” “Reading isn’t a natural thing to do. Neither is painting, snowboarding nor coding. Nobody suggests we abandon any of those. Monogamy also has a certain energy-saving appeal: it saves humans from wasting time and effort on constantly hunting out new mates or recovering from betrayals by current ones.”

While this is lovely and true, there’s even better news: It turns out that monogamy may not be as unnatural as we thought. Our biology seems to support sexual monogamy after all. Research out of Rutgers and New York University found that “couples downgrade the appearance of people they perceive as threatening their relationships.” Both women and men do this.

But when shown a picture of equally attractive people who were said to be in committed relationships (aka, non-threatening), those same men and women rated the photographed people as more attractive than they actually were.

“Misperceiving attractive people who represent threats to the relationship as less attractive may help people resist the inclination to pursue them,” says Dr. Shana Cole of Rutgers University, one of the study authors. “This is especially important since finding someone physically attractive is a primary reason why people choose to date or romantically pursue someone.”

Yes, our very biology, which some claim is constantly looking for different and better, actually tries to protect our monogamy. Yet another example of how science follows what our gut — if not always our hormones — and our faith tells us: we are made for monogamy, marriage makes a family, and family is worth protecting.

That our minds discount the attractiveness of a potential “threat” to our marriages and our families speaks volumes about the importance of faithfulness not only to one another but to the reason for being given these amazing minds which attempt to protect us in this way.

But this study, of course, doesn’t mean monogamy just got easier: couples who were in less satisfied committed relationships answered just like the single participants, that is, they found attractive people more attractive than they were.

The take-away from all of this? Fidelity takes work. Staying in a place where we are satisfied in our marriage is difficult to maintain through life’s peaks and valleys. But when we work on our relationships, and choose to say no to tiny steps toward infidelity, we are far better off. In the end, monogamy is a prescription for long-term happiness.