Heroic faith and action in the heart of the Big Apple

Summertime in New York City is something everyone should experience at least once in their lives. The city’s ordinarily rabid pace tapers off a bit as city dwellers escape to the Hamptons or the Jersey Shore, fleeing the smell of molten asphalt and trading it for the scent of salt air. The sound of children squealing with delight around fountains and fire hydrants fills the sweltering air with the song of summer, as waves of tourists stroll around the concrete canyons known as Times Square, having their senses assaulted by the staggering array of lights and colors.

In the early evening on Friday, June 31, as the sun mercifully withdrew its burning rays, a group of men and women from the Church of the Holy Innocents on West 37th Street made their way through Herald Square up to Times Square to pray for Christians undergoing persecution around the globe.

See the story in photos: 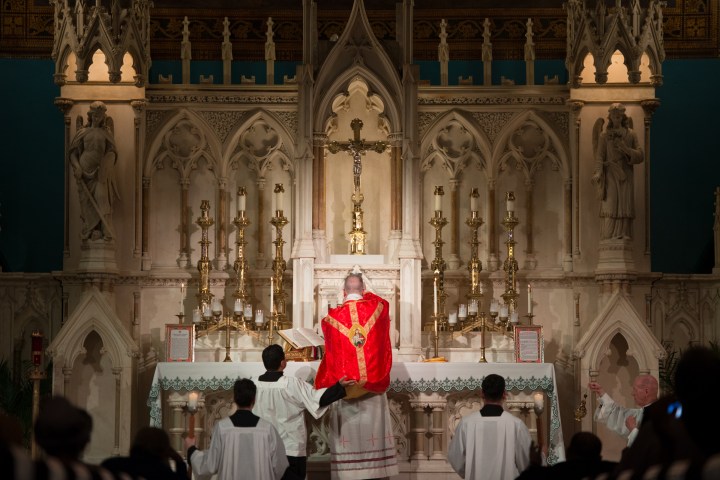 Their journey begins behind the walls of the iconic church with Mass in the Extraordinary Form, which evokes a sense of deep reverence and a real awareness of Who is at the center of their mission.

As the voices of the choir tapered off and those gathered spilled onto the sidewalk to begin their trek, a gruff and disheveled figure shuffled his way towards the crowd, and at once pointed a calloused finger to one of the signs, barking, “I want that one! It’s powerful!” Heads whipped around as the man’s thickly bearded face broke into a huge smile and hearty laugh. The man, Luis Menchaca, known throughout the city as Lifeboat Louie, spent most of his life at sea, serving abroad in both the Navy and the merchant marine before landing in City Island and finding respite among the derelict boats that he calls home … New York’s very own “Ancient Mariner.”

As Lifeboat and company cast off toward Herald Square, their voices raised in song, the eyes of the passersby sensing commotion turn to see signs begging prayer for Christians suffering persecution from Africa to India. It’s a subject drowned out by current headlines and relegated to obscurity in spite of the reality that few things have improved.

Undeterred, this prayerful posse heads into the lion’s den, relying upon God’s grace and Our Lady’s intercession to bring about the conversion of hearts and souls needed to end the “Saul-like” persecutions that rage around the world.

Can prayer make a difference? “Yes,” according to one of the participants. “When we pray together, we offer the situation to God … and He can make ALL the difference, just like He did for the early Christians …”

And just as in the early days of Christianity, heroic faith and bold witness remain the cornerstones of proclaiming the Gospel. It’s inspiring to see that there are still those who live this truth courageously, especially in the heart of the big city.

“On his journey, as he was nearing Damascus, a light from the sky suddenly flashed around him. He fell to the ground and heard a voice saying to him, “Saul, Saul, why are you persecuting me?” He said, “Who are you, sir?” The reply came, “I am Jesus, whom you are persecuting.”