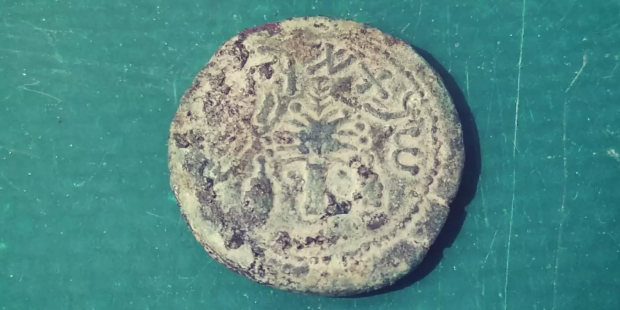 Expert believes the coin was dropped by a Jewish agent hiding from Roman pursuers.

Last week, while sifting through debris taken from the City of David, workers discovered an ancient coin minted by Jewish Rebellion forces in the year 69 AD. It was originally found in the sewers beneath ancient Jerusalem, where it must have been sitting for nearly 2,000 years.

The coins that the Jews minted in the year 69 all bear the words “For the Redemption of Zion”; this one depicts a wine cup, while the opposite side shows the so-called “four species” (symbolic fruits and branches used in the celebration of the Jewish feast of Sukkot) and the words “Year Four.” This refers to the fourth year of the rebellion of the Jews against Rome, which began in 66 AD.

The words on the coin were printed in Paleo-Hebrew, a much older language than the Hebrew that had been spoken and written since the 2nd Temple era. The presence of such an old form of the Jewish writing suggests the resistance was honoring their heritage.

It is possible that the coin was dropped on the street and rolled into the drains; however, Reut Vilf of the City of David Foundation believes it was dropped by a Jewish agent who was hiding from Roman forces in the sewer.

We know that the Jews often sought refuge from Roman pursuers from the writings of Yosef ben Matityahu, aka the Roman-Jewish historian Josephus, who wrote: “For they were not able to lie hid either from God, or from the Romans” (“The Wars of the Jews,” Book VI, Chapter 7:3).

Vilf explained to Haaretz, “The coin was found exactly in the same place that Jews had been hiding in the drainage channel under the street.” More evidence that the sewers were used as a refuge were found in fully intact oil lamps and whole cooking pots, suggesting that Jewish agents would spend quite a lot of time down there.

“These objects couldn’t have fallen down there. They would have shattered. Since they were found whole, somebody had to put them down there deliberately,” Vilf pointed out. Among the objects found in the sewers was also a Roman sword, although it is unclear if it was left by a soldier or hidden as a prize by a Jewish agent.

There was also a section of bricks on the road that had clearly been uprooted, suggesting that Roman soldiers were searching under the road for their prey.

It is very rare to find a coin minted in the fourth year of the revolt, because most of the currency from their short-lived movement was minted in 67 AD. The year 69 was the last year they minted any currency at all, as the following year saw the Roman armies’ ultimate victory over the resistance.

There was also a subtle difference between the coins of 67 and 69 AD; they changed the phrase “Freedom of Zion” to “Redemption of Zion.” Vilf speculates that the writing on the coins may be an indicator of the fading hope of the Jewish forces:

“Freedom is an immediate thing, while redemption is a process,” said Vilf, interpreting the message of the brief text. “It could attest to their understanding that the end was nigh.” Realizing that they weren’t going to relieve Zion from the Roman oppressor, they began hoping for future redemption one day.