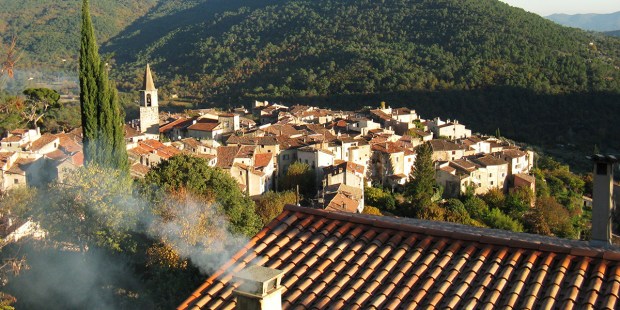 The local parish priest talks to us about the exciting challenges of bringing Mary to the heart of his village community.

The village of Bargemon, in the commune of Var in France, is one of two sites of Marian apparitions in Provence. Until the Revolution, it was an important center of pilgrimage, and since the parish priest has reinstated the Virgin Mary at the heart of the village, the pilgrims are flocking once more. What’s more, a community of 42 Christian refugees coming from Iraq have also actively participated in this revival. The parish priest, Fr. Philippe-Marie Métais Fontenel, took the time to talk with us about the village’s impressive changes, as well as the positive impact the refugees have made on parish life.

Aleteia : Why did you come to Bargemon?

Philippe-Marie Métais Fontenel : I was appointed priest of the three small parishes 6 years ago. To get some respite I had asked the bishop for a small parish in the middle of nowhere that nobody wanted. Straight away he thought of Bargemon! On my arrival I discovered that this village was an important international Marian sanctuary between the 17th and 18th centuries. Thousands of pilgrims had come here but everybody had since forgotten it. There was only an annual festival with a Mass, during which 50-odd people came to kiss the statue. A whole barbecued lamb topped off the occasion. One day somebody offered me a little book titled The Unknown Treasure, written in 1641 and republished in the 19th century. Right from the introduction, the author said that “no where else in the world did the Virgin Mary give so many graces as in Bargemon.” Published five years after the apparition and the beginning of the miracles, it explains the grace of Our Lady of Bargemon: “a grace of conversion by the sacraments and of the commitment of the work of God.”

Reviving a totally forgotten pilgrimage is a challenge. How did you do it?
Well I was there on a full-time basis, and the parish had already started to get things moving and put things in place. I prayed to the Virgin Mary and little by little I felt that she wanted the sanctuary to come back to life. When, in prayer, I asked her where to start, I received a call from the diocesan department of pilgrimages who wanted to organize something in Bargemon. In the thick of it all, other parishes joined up and came too. I then noticed that the Virgin Mother wanted to regain her place in the center of the village. We only had a small four-inch statue, hidden away in the presbytery. She had been placed in the chapel of the church under a painting made after the very detailed description of the apparition in 1635.

And the Iraqi refugees?
While the sanctuary went through its revival, the indignation of Pope Francis really touched me. He didn’t understand why so many of the Church’s buildings remained empty, and asked for the poor to be received. In my 9,000-square-foot presbytery, I felt particularly concerned! A little later, the pope called the parishes to welcome a family of refugees. I gathered together around 30 volunteers and we prepared things. We acted on the Word of God: “But seek first his kingdom and his righteousness, and all these things will be given to you as well” (Matthew 6:33). To pay for this reception the parish didn’t give a cent and we didn’t ask for any subsidies. Without asking for a thing, we received $580,000 in three months. One day one of the members of the team was on the phone to someone from the diocese who was following what we were doing. He was astonished and asked: “How do you do it?” The team member, an atheist, replied to him: “Don’t you worry, it’s Providence.”

Providence is also at work in very concrete ways, like the time we needed a vehicle with nine seats. There was one for sale in the village and the owner allowed us to use it until we had the means to buy it. During a pilgrimage, at the moment of the offertory, a large sum was collected through Lenten efforts. There was just enough to buy the vehicle, as well as the matriculation and two necessary tire changes. With the Virgin Mary I understood one thing: you just need to say “yes” and she’ll take care of the rest.

How have the refugees settled into the parish?
As soon as they arrived they were included in parish life. They were thirsty. The first thing they asked for was to rediscover the Church, even before taking the time to rebuild themselves and learn French. Therefore they naturally participated in Mass and parish activities. The Virgin Mary wants to make the village a new oasis of Christian life. For this to happen, we need to bring charity back to its center. The Iraqis are working and looking after, with the rest of the villagers, the free stores that have been opened: a grocery store, a clothing and furniture deposit. The poor from within the sound of the parish’s three bell towers come flocking. The refugees also join in with the sewing, washing and ironing workshops and want to get involved in a new carpentry workshop which was given to us on St. Joseph’s day. Today, everybody has rallied together. This changes the spirit of the village and the way of perceiving the Church.

How do you see their future in Bargemon?
Some have started to build a profession. Having contributed voluntarily to the restoration of the churches and presbyteries, the quality of their work has become so well-known that they are starting to create their own firms. As for the women who are able, they work in the sewing workshop. A local business that has just created a new line of clothing is giving them the responsibility to make the designs. The accommodation in the presbytery is a sort of transition. The refugees stay a few weeks before settling into apartments in the village. As soon as the administrative formalities are finished with and they receive their allowances, they become autonomous. For three and a half years, around 100 people have been welcomed. Once they have resolved their legal status, only those who wish to work for the charity and the sanctuary remain. We guide the others and help them get on their feet elsewhere.

With the participation of the refugees at Mass, have your liturgies changed?
We have installed a screen that gives the translation of the readings in Aramaic and Arabic. During the offertory and after communion, instead of having music, the Iraqis sing in Aramaic or Arabic. We also recite the Lord’s Prayer in French and Aramaic. Today the refugees and the parishioners, old and new, have become brothers. Some of the Iraqis have said to the bishop, Mgr. Dominique Rey, “Those who welcomed us convert, and we, we convert, too!”

What are your projects?
We have just bought a convent to welcome pilgrims. Also, the film producers Steven and Sabrina Gunell came to Bargemon and have decided to produce a film that should be released in December. They launched an appeal to fund the project on credofunding.fr. This will enable us to share the grace of Our Lady of Bargemon and the miracles that she is still making today. I am delighted!