African-American Catholic basilica in Virginia is a testament to history 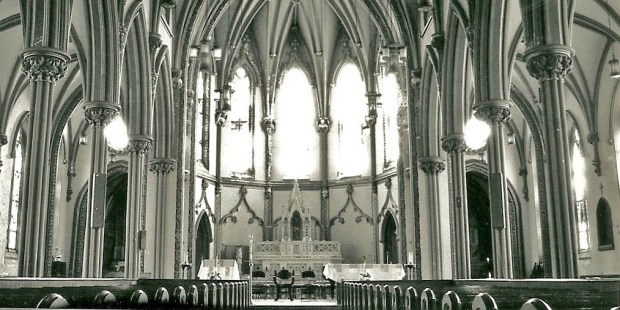 St. Mary of the Immaculate Conception has served black community for over 200 years

Norfolk, Virginia, is home to St. Mary of the Immaculate Conception, the only historically African-American Catholic church that is also a minor basilica. Like the histories of both African-Americans and Catholics in this country, its own history is full of struggle and misunderstanding, faith and hope.

Founded as St. Patrick’s parish in 1791, it displayed the “catholicity” of the Church from its earliest days: Irish and German immigrants, slaves and freemen, all worshiped together.

By the 1850s, that quality caught the attention of the infamous “Know-Nothings,” the party that worked vigorously to keep Catholic immigrants out of the country. St. Patrick’s pastor was allowing racially integrated Masses, and that raised the Know-Nothings’ ire, said Fr. Jim Curran, rector of the basilica.

The pastor at the time, Fr. Matthew O’Keefe, wasn’t intimidated by the many threats directed against the church, himself and the parishioners. He refused to segregate the Masses.

In 1856, a suspicious fire left only three walls standing and a wooden crucifix unscathed. The cause of the fire was never determined.

“We don’t know for sure if they were the ones who burned it, but it’s widely believed, it’s a commonly held notion that it’s the Know-Nothings who burnt the Church,” Fr. Curran told Catholic News Agency.

With the help of donations from Catholics up and down the East Coast, Fr. O’Keefe rebuilt St. Patrick’s in less than three years, renaming itself Immaculate Conception, in honor of the newly declared dogma that Mary, the Mother of God, was immaculately conceived in the womb of St. Anne.

In 1889, the Josephites, a religious community serving African-Americans, built St. Joseph’s Black Catholic parish, according to CNA. The two parishes operated separately within several blocks of one another. St. Joseph’s was demolished in 1961 to make way for new construction, and the two parishes were joined, reintegrating St. Mary of the Immaculate Conception.

But the merger was not popular with many of the white parishioners and conflicted with the segregation policies of local government institutions and public life, Fr. Curran told CNA. “St Mary’s became a de facto black parish.” Explains the Catholic news service:

During this demographic shift, many parishioners of St. Mary of the Immaculate Conception had to draw deeply upon their faith. Black Catholics had to be stalwart, facing prejudice from both some white parishioners, who did not view them as fully Catholic, and some black Protestants, who did not support their religious beliefs.

“They were devoted, and still are,” Fr. Curran said. “You have to be very devoted to be a Black Catholic.”

“Your black cultural heritage enriches the Church and makes her witness of universality more complete,” the pope said at the time. “In a real way the Church needs you, just as you need the Church, for you are a part of the Church and the Church is part of you.”