This saint bore the stigmata every Good Friday for 38 years 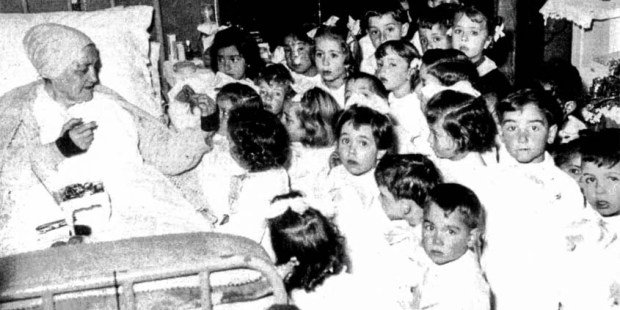 Elena Aiello was born in Cosenza, Italy, on April 10, 1895. She was the third of eight children born to Pasquale Aiello, a tailor by trade, and Tereseina Pagilla. Sadly and unexpectedly, Tereseina died at an early age, leaving her husband with eight children in his care.

Pasquale was a man of great faith, and he imparted this to his children. In fact, he must have been one special man because his one-year-old child died after his wife’s passing and while carrying the extra grief, Pasquale diligently plied his trade and did his best to care for the kids.

Even as a young child, Elena was devout. She practiced penance on a daily basis and offered prayers for the souls in Purgatory. She received her First Holy Communion when she was only nine (at the time the customary age to receive was 12 to 14) and received her Confirmation when she was 11 years old.

She already was feeling a call to religious life, but her father asked her to put her plans on hold because of the war (World War I began in 1915). During these war years, Elena helped refugees, assisted prisoners, nursed invalids and tended to the dying.

She never worried about the possible dangers to herself or of catching some contagious illness (this was before the age of antibiotics). She, in effect, had begun her earthly ministry on her own, before entering the convent.

After the war, Elena’s father gave her permission to enter the convent but insisted she join the Sisters of the Most Precious Blood; he gave no reason. Soon after joining the sisters, Elena was forced to leave because of a diseased shoulder that had been operated on improperly and had turned necrotic. Also, she now had stomach cancer and could not even hold down liquids.

When her doctor said she was incurable, Elena decided to turn to St. Rita for help. She told the doctor, “I will not die from this disease because St. Rita is going to make me well.”

Elena and her cousin went to a church and prayed to St. Rita begging her for a cure. Elena wrote in her notebook of how she saw flames all around St. Rita’s statue, while her cousin saw nothing. That night she dreamt of St. Rita who told her she wanted devotions held in Montalto in her honor to help rekindle the lost faith of the people.

Elena started a Triduum to St. Rita. St. Rita appeared to her and asked her to do a second triduum, telling her she would be cured. However, she also told her the pain in her shoulder would not go away because she had to suffer for the sins in the world. (Her spiritual director documented all these facts.) One night Elena went to bed as usual. When she awoke in the morning, she was (except for the painful shoulder) completely cured. The year was 1921.

Elena Aiello was lying in bed on Good Friday in 1923. The time was 3 p.m. Her left shoulder was screaming in pain as she prayed her devotions. Suddenly, Our Lord appeared to her dressed in a white garment and wearing a crown of thorns. Jesus asked for her consent and then removed the crown from His head and placed it on hers. Blood began to flow, and Jesus told her He wanted her to be a victim soul, asking her to suffer for the many sins committed in the world.

During this time Elena began having visions. Not only Jesus, but the Blessed Mother, St. Therese of Lisieux, and St. Francesco Paola also appeared to her.  In 1928 she founded a new religious order and named it Minim Sisters of the Passion of Our Lord Jesus Christ. Pope Pius XII, who knew of Elena, gave pontifical approval for the order in 1949.

Lastly, the many prophecies of Elena Aiello have been documented.

Pope Benedict XVI recognized the second miracle attributable to Elena Aiello on April 2, 2011. Her beatification was in September 2011.