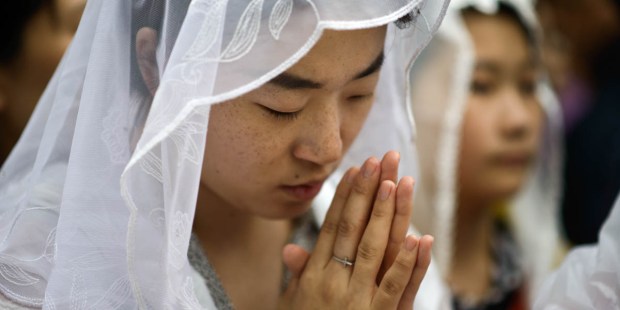 An official from the Secretariat of State is currently on the peninsula, meeting with leaders and visiting the border.

Archbishop Paul Gallagher began a six-day trip to South Korea on July 4. The Vatican Secretary for Relations with States is scheduled to visit the border with North Korea.

The archbishop met President Moon Jae-in on July 5, during a “cordial and packed” discussion, according to a Holy See’s press release.

The British prelate shared the “support and prayers of the pope” for peace and reconciliation in the peninsula. The two men spoke of the importance of re-launching humanitarian initiatives and a culture of peace for young people.

In the continuation of his program, Bishop Gallagher is scheduled to go to the demilitarized zone that separates the two Koreas. He will visit the construction site of a Catholic cathedral under construction near the border.

On July 6, there will be a meeting with Foreign Minister Kang Kyung-wha and around 45 Catholic lawmakers. Bishop Gallagher is scheduled to participate in a Catholic forum on peace and human rights on July 7 and 8, and preside over Mass at Seoul Cathedral.

On January 26, Kang Kyung-wha went to the Vatican and officially invited Bishop Gallagher. Diplomatic relations between the two states were established 55 years ago.

A very important role for the Church

On June 10, the Sovereign Pontiff implored the Virgin Mary, Queen of Korea, for a “future of peace” to be possible in the peninsula, after months of strong tensions due to the North Korean nuclear program. Two days later, the historic meeting between US President Donald Trump and North Korean leader Kim Jong-un was hailed as “very important” by the new nuncio to South Korea, Archbishop Alfred Xuereb.

“We went from strong statements like ‘fire and fury’ to words of peace and harmony,” said the Maltese prelate. In May, he also said that the Church has a “very important role to play in the reunification process” of the two Koreas.

Read more:
Joint Korean team at Olympics gives hope for a world where conflicts are resolved with respect, says Francis