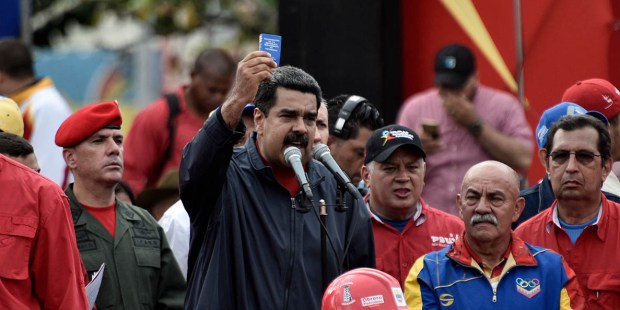 Maduro regime increasing pressure on freedom of the press

Many Venezuelans have been struggling to survive an economic crisis that has put a premium on some of the most basic necessities of life: food and medicine.

Soon, they might be starving for reliable information as well.

According to the Washington Post, El Nacional, a venerated 75-year-old newspaper, faces a twin threat: a judicial case lodged by one of President Nicolás Maduro’s top lieutenants and the blocking of its website.

The development follows a troubling trend: Since the rise of Hugo Chávez, who became president in 1999 and ruled until his death in 2013, the state TV channel started airing hours-long presidential speeches and propaganda. In 2004, Chávez passed a law allowing the official censure of outlets by a state watchdog, CONATEL. A number of TV station and newspaper owners were pressured to sell to friends of the government or close their doors. Pressures have increased under Maduro, Chávez’s successor. According to the Post:

Now, an old case against El Nacional, which has run allegations of electoral fraud, images of protests, and reports on crumbling hospitals and malnutrition, has resurfaced, as the Post explained:

In 2015, El Nacional’s editors republished a piece from the Spanish newspaper ABC about a U.S. investigation into the narco-trafficking links of Diosdado Cabello, a senior member of Maduro’s government. The response was swift. Cabello, who has denied the accusations, filed a defamation lawsuit against El Nacional and its owner, Miguel Henrique Otero.

Fearing imprisonment, Otero — whose grandfather founded the newspaper — fled to Madrid, where he has been living in self-imposed exile. The paper went years with no word on the lawsuit’s status. But on June 3, a pro-government legislator made an announcement in a televised interview. A ruling had been issued, he said, that ordered El Nacional to pay 1 billion bolívares in damages — or $10,400 at the official exchange rate. If it didn’t, the lawmaker said, Cabello could “take control” of El Nacional.

The newspaper’s website this month became the target of an unsuccessful effort to block its URL, a move that experts say signals the government may be finding sophisticated ways to increase web censorship, said the Post.

“If El Nacional is closed, it would have a grave impact in Venezuelan media,” Carlos Correa, executive director of Public Space, told the Post. “It would signal an escalation of censure and would definitely have a chilling effect on other outlets fearful to go through the same fate.”