Leaders of East and West gather with St. Nicholas to plead for Mideast Christians

Pope and patriarchs together: Without Christians what will be the Middle East?

According to Pope Francis a Middle East without Christians would not be the Middle East. But the violent conflicts that have gripped the area in recent years threaten to push Christians and other minorities out of the region forever.

Pope Francis and the leaders of several eastern and western Christian Churches met in Bari, Italy, on July 7 to discuss the situation of the Christians in the region and look for ways to work together for peace.

The Italian city of Bari seems like an unlikely place to act as a hub for ecumenical relations. But thanks to the relics of Saint Nicholas there, the city has been a meeting place for eastern and western Christians as long as anyone can remember. That is why Pope Francis picked Bari as the location of his day long meeting with the heads of Christian communities of the Middle East.

Greeting the patriarchs of eastern Catholic and Orthodox Churches at the Basilica of St. Nicholas, the pope noted how the Christian faith originated in the Middle East, as did several different monastic traditions and rites.

“Yet this region so full of light, especially in recent years, has been covered by dark clouds of war, violence and destruction, instances of occupation and varieties of fundamentalism, forced migration and neglect. All this has taken place amid the complicit silence of many,” said Pope Francis.

After his words of greeting Pope Francis and the patriarchs made their way to the lower crypt of the basilica to venerate the relics of Saint Nicholas.

Click “launch the slideshow” to see images from the day. 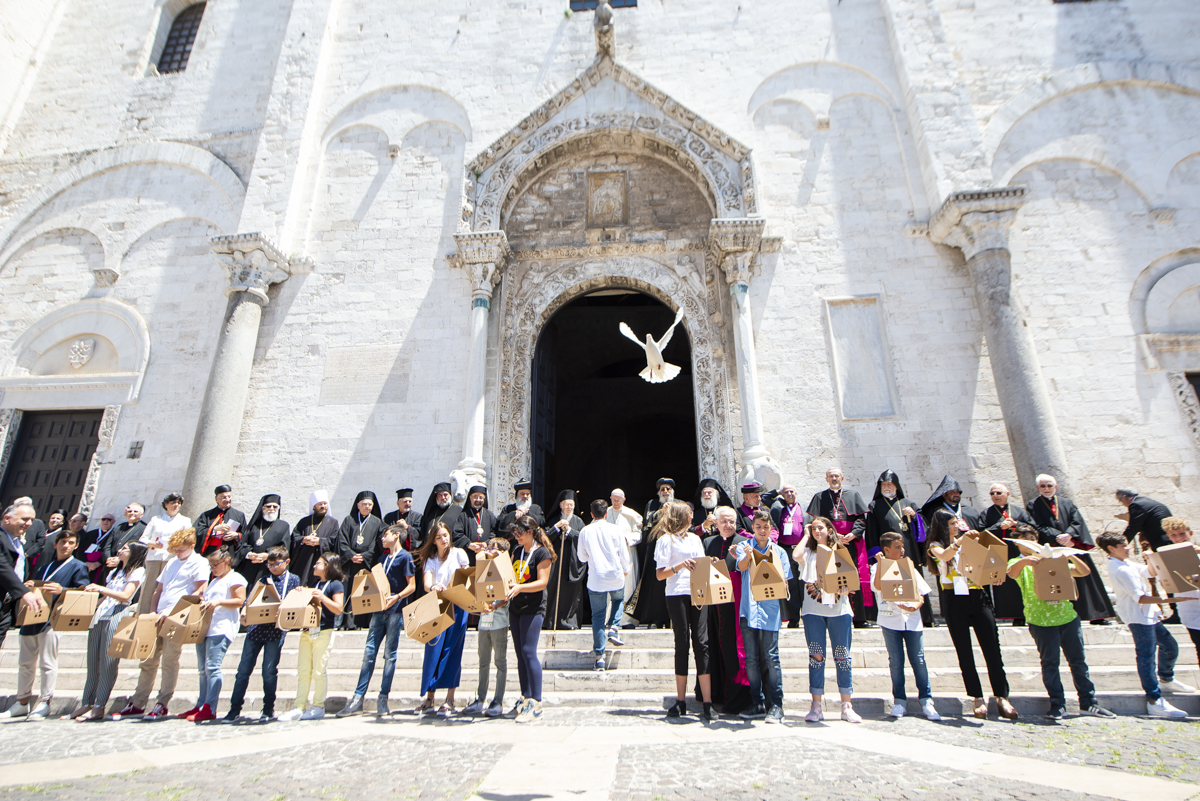 The patriarchs and representatives of other Churches praying with the pope were:

-Theodoros II, Greek Orthodox Patriarch of Alexandria and All Africa

-Ignatius Aphrem II, Syriac Orthodox Patriarch of Antioch and All the East

-Patriarch Gewargis III, Catholicos of Assyrian Church of the East

The Church of Cyprus, Armenian Apostolic Church, and the Greek Orthodox Patriarchate of Jerusalem had bishops in attendance.

The Coptic, Syriac, Maronite, Chaldean, and Armenian Catholic patriarchs were all in attendance. The Melkite Church was represented by the Bishop of Aleppo.

After venerating the relics, the religious leaders made their way to a rotunda on Bari’s seaside walkway where they took part in an ecumenical prayer service for peace.  Though the choir was from the Archdiocese of Bari – Bitonto, the music for the service was in Italian, Arabic and Aramaic. The Gospel was proclaimed in Arabic by a Syrian deacon.

From the prayer service Pope Francis and the representatives of the other churches returned to the Basilica of Saint Nicholas for a closed door dialogue. The apostolic administrator of the Latin Patriarchate of Jerusalem, Archbishop Pierbattista Pizzaballa, opened the session with an overview on the situation of Christians in the Middle East.

At the end of the dialogue session Pope Francis and the patriarchs appeared in the square outside the basilica. Addressing the faithful gathered in the square the pope said like Jesus’ night of Agony in the Garden of Gethsemane, running away or taking up arms will not bring about a new dawn.

He said the dialogue session was a reminder that encounter and unity must be worked on, constantly. To do that work “it is essential that those in power finally put themselves at the service of true peace and not their own interests” the pope said, adding, “Let there be an end to the few profiting from the sufferings of many! No more occupying territories and thus tearing people apart! … Let there be an end to using the Middle East for gains that have nothing to do with the Middle East! ”

He recalled recent violence in Syria saying many conflicts are caused by a form of  fundamentalism and fanaticism that claim to be rooted in religion but are actually acts of blasphemy against God. “But violence is always fed by arms. It is not possible to speak for peace while secretly pursuing a race for rearmament. It is a grave responsibility that weighs on the conscience of nations, especially the most powerful,” the pope said.

Turning to Jerusalem, the pope said the city which is sacred to Christian, Jews, and Muslims has a special vocation that needs to be respected. He said the status quo negotiated by the international community must be respected. Only a negotiated solution between Israel and Palestine will lead to lasting peace.

“Too many children have spent most of their lives looking at ruins rather than schools, listening to the roar of bombs rather than playful noise … in drying their tears the world will regain its dignity,” the pope said.

The one-day gathering had been in the works for months if not years. Cardinal Leonardo Sandri, the head of the Vatican’s Congregation for Eastern Churches, told media earlier in the week that Chaldean and Assyrian patriarchs asked Pope Francis for such a meeting in person some time ago while the Maronite Patriarch sent a letter on behalf of other Middle Eastern Patriarchs, making the same request.

The Congregation for Eastern Churches worked with the Sant’Egidio Community, the Secretariat of State and the Pontifical Council for Christian Unity to make the meeting happen.

Cardinal Kurt Koch, the head of the Council for Christian Unity, said that before World War I about 20% of the Middle East population was Christian. Today only four percent are. The cardinal said because of the precariousness of the Christian population, it is also the place where ecumenical relations are strongest.

Bari has been considered a bridge to the east since at least 1087 when sailing merchants brought the relics of Saint Nicholas back to Bari from Antioch and installed them in the city’s basilica. The saint was venerated – and even argued over – by both eastern and western Christians. In 1966 an Orthodox chapel was built in the crypt of the basilica. In 2017 the relics were removed from the basilica and sent to Moscow, on loan to the Russian Orthodox Church. It was the first time in 1000 years the relics had left Italy.