Maybe God doesn’t care who wins, but here’s why we should still pray for our team 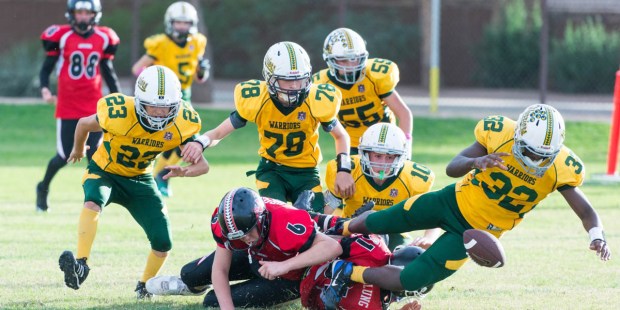 Mary is Queen of Victory, though the victory she promises is neither athletic nor military.

When I was a teacher, I spent a lot of time at games and matches and meets. I went to baseball and basketball and volleyball to support my kids; I went to football because it’s football. What other reason could one need? So in 2010, I hopped in a school van with a handful of other teachers and made the 40-mile drive through the wheat fields of Kansas to watch my boys lose.

At least, that’s what I was expecting. They hadn’t won a game since 2006, before any of the guys currently wearing black and gold jerseys had even set foot on a high school football field. But I loved my students, so off I went.

Kansas weather being notoriously fickle, the game that had started under clear skies was soon called on account of thunder. We were losing. To add insult to injury, we were expected to drive back to our opponents’ field to finish the game when it was rescheduled.

So we did. A few days later, we piled back into the school van and headed to watch these discouraged kids try once again not to lose.

Again we settled into the stands with hot dogs and what passes for nachos at high school concession stands. Again we watched our boys get pushed around. Again the clouds rolled in. Again they called the game.

A third time we made our way to the middle of nowhere (having now lost another game in the time we’d been playing this one). As before, the team began with a prayer. It was mostly inaudible from the stands, but each time it ended with a team captain calling out, “Our Lady of Victory!” and the others yelling, “Pray for us!”

I can’t imagine that they expected their prayer to be answered any more than it had been at the 25 other high school games they’d played. But it was part of their pre-game ritual, shouting and all, so they went through the motions.

This time, though, the game was different. The skies stayed clear. The line held strong. Our running back was on fire. Miracle of miracles, we found the end zone! And at the end of the game, we were on top, 23-10.

The atmosphere in the stands was electric. This was a long-fought battle, not just in our three attempts to play the game but through the years of losses and discouragement. And finally, finally, we had won! Maybe this would be our year! We had no hopes of a championship, but maybe a winning season!

Then the crowd stilled. The team was praying. We bowed our heads to join in silent prayer, and when they were done, we heard the guttural cry of an overwrought teenage boy: “Our Lady of Victory,” he bellowed.

“Thank you!!!” came the response, louder than I thought possible and more fervent than I’d ever seen these young men in their devotions. Many of them were not Catholic, some not even Christian, but in this moment they were loyal sons of Our Lady of Victory. They were desperately grateful to her for her intercession. Had they not been invited to pray together after the game, this might just have been a feeling of elation; the prayer turned it into gratitude, a deep sense that their victory wasn’t just earned. It was a gift. And they were unceasingly grateful to the Giver and to the Lady through whose hands it was given.

It seems a paltry thing for such an exalted title, one given to Mary in thanksgiving for seemingly miraculous military victories. Most famously, her intercession was credited with saving Christian Europe from the Islamic invasion at the Battle of Lepanto in 1571.

Ultimately, though, the victory she promises is neither athletic nor military. Mary is Queen of Victory because it was through her fiat that God became man, through her motherhood that death was defeated. Her cooperation made it possible for Christ to strike at the head of the serpent, as God had promised mere moments after the Fall (Gen 3:15). She is Queen of Victory because her virtue was a victory over Satan, because her intercession strengthens us in our fight against sin, because she consoles us in defeat.

Read more:
God hates death and destroys it every chance he gets

But that Fall evening, it was an insignificant, life-changing football game that forged her victor’s crown. Those boys might never have cared about Mary before that game and they might not have thought of her since. But for a moment, they loved their Mother with all their hearts. And I have to believe that somehow that will make a difference in their lives.

Maybe praying to win football games is silly. Maybe heaven isn’t glued to the TV, desperate to see if God’s favorite team can convert on fourth and inches. But I hope Catholic schools pray before games as long as sports exist. Not because it changes the outcome but because it changes us.