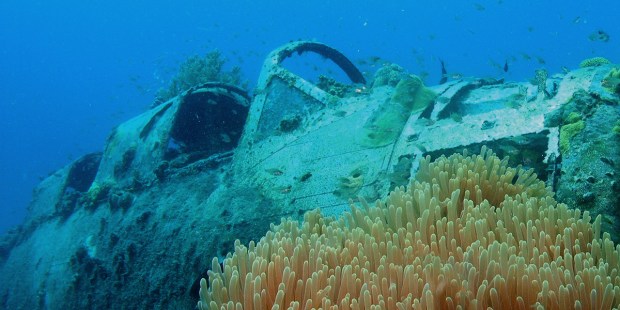 Seas and fields of Papua New Guinea continue to offer clues to fate of soldiers who never came home.

Some 72,000 World War II-era GIs were never found. Lloyd Woo may be helping to locate some of them.

Woo, a tour guide in Papua New Guinea, shows tourists where they can find the wrecks of World War II-era aircraft. He takes visiting scuba divers out into the Bay of Rabaul, at the northern end of Papua New Guinea’s New Britain Island.

During the Second World War the Japanese used Rabaul as a forward base to attack the New Guinea mainland. But they were defeated in the 1942 Battle of Milne Bay, a turning point in the Pacific Theater. The bay saw one of the most intense, sustained Allied bombing campaigns of the war. Underground tunnels, built by POWs and locals forced into service by the Japanese occupiers, were used for shelter.

Today, downed planes are still being discovered in farmers’ fields and deep underwater. The tourist activity is prompting efforts to match the aircraft with the names of soldiers missing in action, according to National Public Radio.

“Everything’s still intact, the propeller’s still there, the double wings,” Woo tells the visiting scuba divers. “You get to about 25, 26 meters [85 feet], you’ll meet the plane.”

Another local, David Flinn, a member of the Rabaul Historical Society, occasionally accompanies crews that dive to locate war-era wrecks. But due to the danger of unexploded artillery and laws governing war graves, Flinn and his team can’t touch the wrecks they find. Instead, they look for serial numbers, take as many pictures as possible and notify authorities.

The U.S. Defense POW/MIA Accounting Agency, which works to identify and match remains of servicemen who have been found, welcomes help from locals like Woo and Flinn, as well as people like Justin Taylan, an American researcher who runs a nonprofit called Pacific Wrecks. Taylan tries to locate missing crash sites out of a personal desire to find answers. He points out that during World War II, things like GPS and black boxes didn’t exist. “So a plane disappeared completely. Sometimes it was seen over the target or seen returning, but never showed up at the base,” Taylan told NPR. “For the family of that pilot that was seen flying into a cloud and never came out, maybe it would provide closure for them.”

The POW/MIA Accounting Agency is finding it more and more difficult to fulfill its task as time goes on.

“To make a DNA identification, we have to find a family member who can be a potential match, but these service members were 17, 18 years old. They never had children to pass DNA onto,” says Sgt. Kristen Duus, an agency spokesperson. “We may use dental analysis, if they had X-rays prior to death [or] chest radiographs, which were usually done to test for [tuberculosis].”

People like Woo, Flinn, Taylan and the hundreds of history buffs who explore the South Pacific may be vital aids in helping the agency complete its mission.