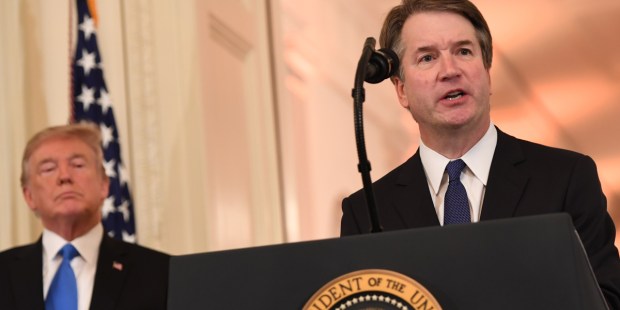 AFP PHOTO / SAUL LOEB
US Judge Brett Kavanaugh speaks after being nominated by US President Donald Trump (L) to the Supreme Court in the East Room of the White House on July 9, 2018 in Washington, DC.
Share
Print
John Burger - published on 07/09/18

Jesuit- and Yale-educated, Kavanaugh clerked for Justice Anthony Kennedy, the man he hopes to replace

Standing with Kavanaugh, 53, as President Trump made his announcement in the East Room of the White House Monday evening were his wife, Ashley Estes Kavanaugh, and their two daughters, Margaret and Liza. The Kavanaughs met in 2001 while working in the White House in the administration of President George W. Bush—she as personal secretary to the president, he as White House staff secretary. She currently serves as Chevy Chase Village, Md., Section 5 town manager.

Bush nominated Kavanaugh to serve on the United States Court of Appeals for the District of Columbia Circuit in 2003. He was confirmed in 2006 and has served on that court since then.

A native of Washington, D.C., he is the only child of Martha Gamble (Murphy) and Everett E. Kavanaugh, Jr., who were in attendance for the White House announcement Monday evening. Both are attorneys, and his mother served as a Maryland state Circuit Court Judge from 1995 to 2001. Earlier, she was a teacher in two predominantly African-American schools in Washington, D.C.

In his remarks following the president’s introduction of him Monday evening, Kavanaugh spoke about how the Jesuits teaching him at Georgetown Prep instilled the ideal of being “a man for others.”

After law school at Yale and clerkships, including one for Kennedy, the man he hopes to replace, Kavanaugh worked for Kenneth Starr when he was Solicitor General and later when he was the independent counsel investigating President Bill Clinton.

“The Supreme Court is entrusted with the safeguarding of the crown jewel of our republic, the Constitution of the United States,” President Trump said in his introductory remarks. “Both Justice Kennedy and Justice [Antonin] Scalia were appointed by a president [Ronald Reagan] who understood that the best defense of our liberty—and a judicial branch immune from political prejudice—were judges that apply the Constitution as written. … What matters is not a judge’s political views but whether they can set aside those views to do what the law and the Constitution require. I am pleased to say that I have found without doubt such a person.”

Trump said that aside from his judicial career, Kavanaugh “coaches CYO basketball, serves meals to needy families, and having learned from his mom who is a schoolteacher in D.C., tutors children at local elementary schools.”

“I am part of the vibrant Catholic community in the D.C. area,” Kavanaugh said in his remarks. “The members of that community disagree about many things, but we are united by a commitment to serve. Father John Enzler [president and CEO of Catholic Charities in Washington] is here. Forty years ago, I was an altar boy for Father John. These days, I help him serve meals to the homeless at Catholic Charities.”

He reminisced on his time working in the White House, noting that the first date he had with his future wife was on Sept. 10, 2001, the night before the Al Qaeda terrorist attacks on New York and Washington. “The next morning I was a few steps behind her as the Secret Service shouted out all of us to sprint out the front gates of the White House, because there was an inbound plane.

“In the difficult weeks that followed, Ashley was a source of strength for President Bush, and for everyone in this building,” Kavanaugh said. “Through bad days and so many better days since then, she has been a great wife and inspiring mom. I thank God everyday for my family.”

He concluded by saying that during his confirmation process, he planned to tell each senator “that I revere the Constitution. I believe that an independent judiciary is the crown jewel of our constitutional republic. If confirmed by the Senate, I will keep an open mind in every case, and I will always strive to preserve the Constitution of the United States and of the American rule of law.”