“Signed, Sealed, Delivered” takes a memorable trip “To the Altar” 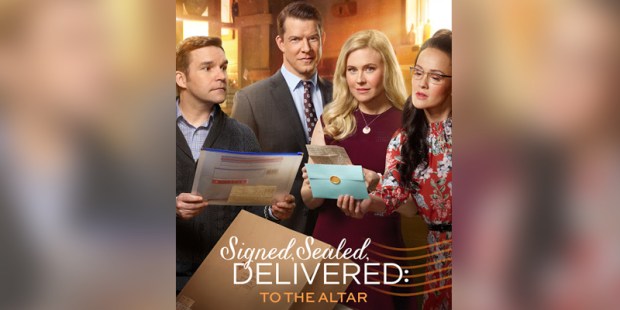 The Hallmark series’ latest (and possibly last) entry explores God, love, and the relationships that make us stronger

“I never knew that strangers could be so kind.”

That kindness has not only made a difference in the countless lives the Postables have helped, but also broken down the walls that Oliver, Shane, Rita, and Norman had built around themselves when the series began back in 2014. “To the Altar” leaves them all in a much different, much happier place, so if this is the end, longtime fans will not be disappointed.

“To the Altar” debuts on Hallmark Movies and Mysteries on Sunday July 15th at 9/8C, and the script by series creator Martha Williamson reflects her usual deft touch in producing funny, poignant, and dramatic moments with an undercurrent of spiritual and emotional heft.

The story begins a week before Norman and Rita’s wedding, which keeps hitting speed bumps as quirky as the couple themselves. That includes Rita’s unsuccessful attempts to track down Norman’s globe-trotting grandmother Ardis (Carol Burnett), who is queen (comically so) of a native tribe in Patagonia.

Shane: Does the Rainbow Tribe have Internet?

Rita: I don’t think so. I think that’s why they’re so happy.

Meanwhile, Shane and Oliver are stealing smiling glances at each other because their own relationship has been evolving, prompting Oliver to admit he’s been “contemplative” lately.

Despite the busy nature of their own lives, the Postables wind up taking on a new mystery when Shane discovers a letter in the pocket of a wedding dress that had been in an undeliverable package marked with unusual stamps of courageous women like Nellie Bly and Amelia Earhart.

The writer explains that she is in too dangerous a situation to attend her daughter’s wedding, but she is sending the dress worn by her grandmother as a gift for her special day. It might need some alterations, she continues, but “sometimes life is like that, too, sweetheart. Sometimes you just need to alter it a little to make it fit better.”

Those clues lead the Postables on what, in my opinion, is one of the best mysteries of the entire series. What, after all, could keep a mother away from her daughter’s wedding? Is she a government agent or is something else going on? The truth is completely unexpected, yet it makes perfect sense and is a timely reminder for our age.

The mother-daughter connection also comes into play in Rita’s story, when we learn that her mom unexpectedly died while on an adventure. While Rita remains upbeat on the outside, she experiences genuine grief that will be revealed as the wedding dress story goes on.

Crystal Lowe has a standout scene in which Rita laments waiting too long to truly appreciate her mom. She wishes she had asked her questions and thanked her for everything she did, but now it’s too late. If mothers across America get phone calls on Sunday night at 11 p.m., Crystal Lowe will be the reason.

Geoff Gustafson also shines as Norman, especially in a scene where he admits to Oliver that he and Rita have never had sex with each other or anyone else (though he doesn’t come out and say it so bluntly). They each wanted to wait for the right person on their wedding night, he explains, and now they’ve finally found each other.

Considering that Norman and Rita are characters in their 30s, this is a pretty rare viewpoint to be expressed on TV. Even more rare is that their decision isn’t belittled. Oliver expresses understanding and even affirmation at what they’ve chosen to do (or not do) out of love.

Writer Martha Williamson weaves this idea seamlessly and believably into the story, just as she does with faith and spirituality. And since she once wrote a book called “Inviting God to Your Wedding,” it’s no surprise that her script doesn’t skimp on spiritual references. For instance, there’s the memorable line, “When you invite God to the wedding, He stays for the marriage.”

Williamson also conveys some beautiful, St. Paul-inspired ideas through the minister (who longtime fans will be surprised and amused by) at Norman and Rita’s wedding, noting that God is the source of all love. It allows two to become one and grows stronger through practicing “compassion, forgiveness, understanding, loyalty, and faith.”

Oliver and Shane have traveled their own journey of love and can’t help but be effected by the wedding planning around them. Four years ago, when the series premiered, the two of them – along with Norman and Rita – were longing for love, but too afraid or wounded to open themselves to it. But as they got to slowly know each other as people, they started altering their hearts and minds bit by bit, contemplating how their lives were better with each other, breaking through the barriers that kept them lonely.

Eric Mabius and Kristin Booth bring Oliver’s buttoned-up nature and Shane’s easy-going style to life, resulting in great chemistry but also a balance between two people who complement each other perfectly. They go from serious to playful with ease, serving as one of Hallmark’s all-time most likable and believable couples.

In case Martha decides to bring the series to an end after this movie, I leave you with a portion of Oliver’s toast after Norman and Rita’s wedding, which captures all that was best about the show and characters.

Oliver: “When we began together as colleagues charged with delivering so many lost things, I believed that ‘to everything there is a season’ – and to every lost letter , there is a divine purpose. Only today, seeing you, Norman, and you, Rita, so happy…only now do I realize just how very lost I was, too. And that your friendship and your faith have delivered me as well. So through rain and snow and dark of night, here we are, together. And I love us. (raises glass) To the Postables.”

(Watch “Signed, Sealed, Delivered: To the Altar” on Sunday July 15 at 9/8C on Hallmark Movies and Mysteries. Check their website for any replays.)