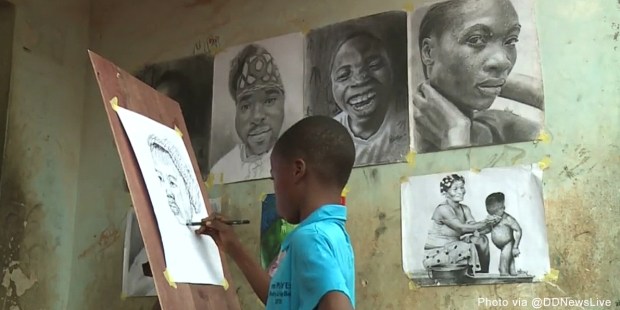 Growing up in poverty has not stopped Kareem Waris Olamilekan from capturing the beauty life has to offer.

At the tender age of 11, Kareem Waris Olamilekan has fantastic artistic skills that also happen to send an inspirational message. Inspired by Michelangelo and Arinze Stanley Egbengwu, Kareem has grown up surrounded in poverty in his native Nigeria. Using the most basic materials and a makeshift studio lacking all creature comforts, the schoolboy is creating works of art worthy of a place in the greatest art galleries.

The young artist started drawing at the age of six, and in just five years he has created pictures using just a pencil that could easily be confused with a photo. His genre of art, which is known as hyper-realism, captures every single detail in a person’s face. We can see the raw emotions felt by the person which are then picked up by the impressively perceptive tween.

His artwork is no doubt staggering, so much so that French president Emmanuel Macron met the young boy on a trip to Lagos where Kareem gave him a portrait. While he is obviously making the art world sit up and take note, what is more impressive is the child’s ability to translate what is going on around him and portray it in such a positive, enlightening manner.

His favorite portrait, titled Daily Bread, is of a young child covered in sweat and tears spooning food into his mouth. Kareem says it represents his family: “We work hard before we put food in our mouths, before we eat. That’s what inspires me,” he explains on a BBC video. Taking a closer look at the picture we can see the obvious struggles endured to have that meal, but we also feel the real gratitude.

Kareem is not alone in this artistic field, yet like many truly great artists he has the incredible emotional maturity to convey profound feelings. This is not a simple procedure, as fellow hyper-realist artist Kelvin Okafor explained in a further BBC video. To draw with such intricate detail takes hours of studying the person, and then hours of putting pen/pencil to paper and making them come alive — needing the patience of a saint.

And speaking of saints, London-based Okafor, whose family also happens to come from Nigeria, made a lifelike portrait of Mother Teresa depicting her years, her toils, and her unwavering devotion — similar to that of these talented artists at work.

11-year-old's hyper-real drawings get a lot of praise