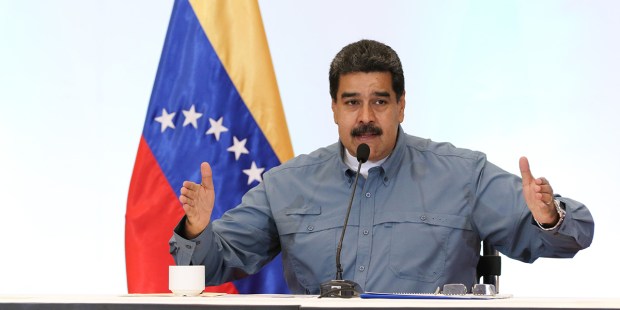 Prelates warn that continuing on current path is “suicidal”

The Catholic bishops of Venezuela warned the country’s leaders that it would be suicidal to continue on the path they have been taking.

In a statement issued at the end of their plenary meeting Wednesday, the bishops of the South American nation called upon the leaders of the opposition to offer Venezuelans “an alternative of change,” urging them to work for the wellbeing of the country.

They also called for greater respect for basic needs and rights.

“Attitudes of arrogance, authoritarianism and abuse of power, as well as the constant violation of human rights, are accumulating on their actors a rejection that future generations will claim,” the bishops said in the July 11 statement. “It is suicidal to continue stubbornly insisting on a path of self-destruction that will turn against its promoters. Neither does it promote impunity for crimes that threaten life and fundamental rights.”

The bishops’ statement, whose title can be translated as “Do Not Be Afraid, I am With You,” was available only in Spanish. Among other problems the country is facing, it listed “monstrous hyperinflation” as a key reason for much of the country’s crisis. The bishops noted that the quality of life for the majority of Venezuelans, which was “already extremely precarious, is deteriorating day by day.”

Other problems include shortages in food, healthcare supplies, public services such as water and electricity, personal safety, employment, the circulation and sale of cash, and interruptions of public transport. Poor economic policies, including strict price controls, coupled with high inflation rates, have resulted in a severe lack of basic necessities, including medicines.

The bishops do not hesitate to blame the regime of Nicolas Maduro “for putting its political project over any other consideration, including the humanitarian.” They criticize the government for “erroneous” financial policies, for its “contempt for productive activity and for private property and for its constant attitude of placing obstacles in the way of those who want to resolve some aspect of the current problem.”

In their statement, the bishops reject both the “National Constituent Assembly” and elections held in May, which many Venezuelans, including the bishops, protested as illegitimate. The charged the regime as seeking to impose “a totalitarian ideology.”

According to the CIA World Factbook, Maduro in 2016 issued a decree to hold an election to form a “Constituent Assembly.” Last July, a referendum approved the formation of a 545-member Constituent Assembly and elected its delegates, empowering them to change the constitution and dismiss government institutions and officials. The U.S. Government does not recognize the Assembly, which has generally used its powers to rule by decree rather than to reform the constitution.

“Democratic institutions continue to deteriorate, freedoms of expression and the press are curtailed, and political polarization has grown,” the Factobook says. “The ruling party’s economic policies have expanded the state’s role in the economy through expropriations of major enterprises, strict currency exchange and price controls that discourage private sector investment and production.”

Venezuela’s Catholic leaders invited the public to look for creative solutions to the crisis and urged parishes and ecclesial institutions to exercise greater solidarity with the suffering populace. The Church community, they said, is called “to promote a structural change in favor of the transformation of our society.”