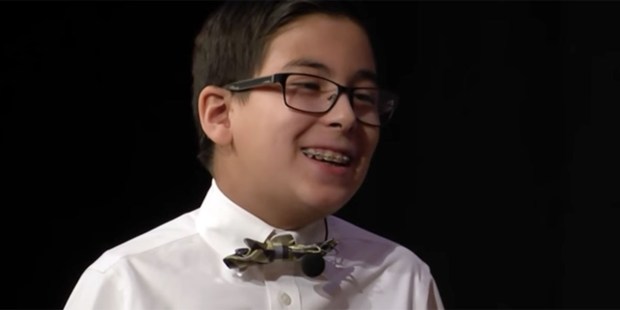 The Community College of Allegheny County is located in Pennsylvania. Its youngest student is William Maillis — and he is really young: just 9 years old.

According to his parents, when he was 6 months old, William already recognized numbers, and at 7 months old, he started to pronounce complete sentences. At the age of 2, he could read, write, and multiply. At the age of 4, he learned to read in Greek, at 5 he knew geometry, and at 7 he mastered trigonometry.

One of William’s teachers, Aaron Hoffman, explains that the boy is the only student who does not take notes in class. He just listens, reads, and absorbs knowledge.

As if that weren’t enough, William Maillis affirms, according to an interview in People, that he would like to become an astrophysicist in order to achieve a very specific goal in life: to help science “prove that God exists.” Williams wants to prove that only one external force is able to form the universe.

For further studies, he plans to deepen his knowledge in physics and chemistry, get a PhD, and show that the theories of the physicists Albert Einstein and Stephen Hawking on the universe are not correct.

“He wants to prove to everyone that God exists, given that only one external force could be able to give life to the cosmos,” explains his father, Peter, saying that his son is dedicated on a daily basis to developing his own theory of the creation of the Universe.

Peter, who is a Greek Orthodox priest, and his wife, Nancy, have always supported William in his goals, encouraging him and believing in his potential, even when at the age of 4 he failed the tests to enter primary school.

Convinced that the error was not in their son’s answers but in the limitations of the exam that did not reflect his extraordinary intelligence, Peter and Nancy consulted a psychologist from the faculty where the child prodigy is now studying, who defined William as a “pure genius.”

His parents say that they want to keep William down-to-earth without hampering his aspirations. “I just want him to appreciate the gift he has,” says Peter in the Morning Ledger. “God gave you a gift. The worst thing would be to reject that gift and not use it for the betterment of the world.”