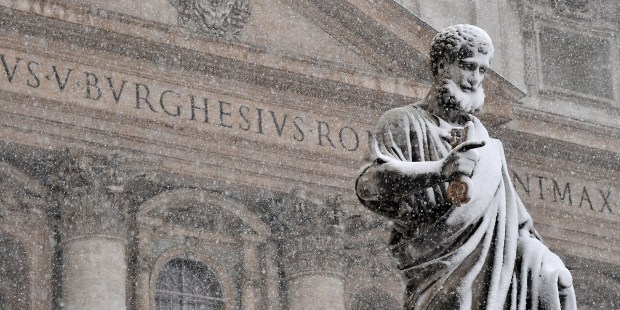 The bad witness of men of the Church forces us to take decisive actions that will help us recover the credibility and enthusiasm in the proclamation of the Gospel.

The history of the Catholic Church has been tinged, every so often over the centuries, with great problems and crises that have shaken its foundation, but through it all, the strength and power of the Spirit of the Risen One prevails, animating the Church and the faith that we have.

Consider a few examples: in its beginnings, Christianity faced great persecution from the Roman Empire. A few decades later, Christianity had to answer to great heresies, which threatened the doctrinal purity and the life of the Gospel in the emerging communities of Christ’s followers.

Centuries later, the Church had to face simony, or the commercialization of faith that scandalously enriched the clergy and that provoked — as a contrary reaction — the birth of the so-called mendicant orders. Sometime later, Martin Luther’s Reformation profoundly shook the doctrinal and practical certainties of the existence and work of the Church.

For every great problem and in every different age, a great solution arose: Christian life validated itself through martyrdom, or the doctrinal and theological body of Christianity was rationalized and perfected through philosophy, or it returned to the evangelical poverty that was so helped by the life’s work of the Master of Nazareth, or it held Councils such as the Council of Trent or the Second Vatican Ecumenical Council that — in their time and for those of their time and context — contributed an update for the Church in the world.

In recent decades, the Church has been suffering from, and the world has been witnessing and accusing it of, serious scandals. For that reason, a deep crisis has developed regarding the sexual life of its ordained ministers. Almost no day passes when, somewhere in the world, we do not hear of a bishop, priest, or member of the clergy starring in some scandal of a sexual nature.

But even though it garners more attention when the protagonists are those who should be models of moral integrity, sexual scandals are the daily bread in all social classes, spheres and institutions of our society. There are men and women of the whole society, especially Western society, who live divided, not reconciled and anguished by their sexuality, either through an erroneous preaching of the Church’s teachings or because our society, moving from modernity to postmodernity, in search of pleasure for the sake of pleasure, has involved us all in a hedonistic, pansexualist lifestyle — that is to say, a lifestyle in which everything (advertising, fashion, language, lifestyles, cultural productions, etc.) involves sexuality and, more specifically and unfortunately, human genitalia.

In a world increasingly materialist and consumerist, in which everything is bought and sold, and money is the means to access the desperate and unbridled pursuit of pleasure, the unwholesomeness of the taboo sells, and through this, sex sells. It sells in the scandals of people in the media, in the trafficking of people, in music and fashion, in pornography, in the objectification of the body and of women, etc.

And priests do not come from Mars. Those consecrated in the ministries of ecclesial life are men and women who come from our hedonistic and pansexualist societies and cultures. For that reason, it is hypocritical to feel scandalized by all the bad things that happen sexually in our society if we were not scandalized first by our own badly conceived, misunderstood and badly experienced sexual and carnal life.

And never does it produce more clamor, or captivate more, scandalize and sell more bad sexual behavior than when scandals are perpetrated by those who should be setting an example in shaping and living their sexuality. For this reason, scandals of a sexual nature hit so forcefully in the life of the Church in the world, especially in its credibility when carrying out the task of providing guidance on issues of faith and morality.

In this context, a series of events in Chile is one of the latest sexual scandals that has most shaken the entire Catholic Church and social media (including some who are especially thirsty for scandal and dedicated to anticlerical sensationalism).

In Chile — for a long time — there were sexual acts of priests with minors, which were poorly handled by the ecclesiastical authorities called to correct and punish and, when these events came to light, the mismanagement of the matter continued with a lack of leadership in confronting it and in communicating with the Vatican, etc. All of this resulted in the humiliation and rejection suffered by Pope Francis during and after his past trip to Chile.

This mismanagement of the crisis caused by these scandals in Chile produced a delayed reaction. But it must be recognized that – in the end — Pope Francis personally took on the responsibility for the solution to the problem. He directly inserted himself into the handling of the issue, took the reins into his own hands and assumed leadership of the crisis. Pope Francis convened the Chilean Episcopal Conference, in which he drew out and accepted several resignations from bishops in the news, summoned key victims to the Vatican, publicly apologized and manifested an effective compromise to bring about positive change. He also created a commission to investigate matters of a sexual nature involving clerics and minors, a commission that is being replicated in every Episcopal Conference in the world. Pope Francis has publicly requested a strong hand and zero tolerance for the guilty.

The situation in Chile thus symbolically and emblematically represents the larger crisis that, concerning the sexual lives of ordained ministers and of men and women consecrated to religious life, the Catholic Church suffers today. Because of this painful experience but, above all, due to its subsequent handling under the leadership of this same pope, there are important lessons to be learned:

First, we find that the minds of men and societies have changed and that the position of men, institutions and societies before the Church and their role in the world has changed. We also find that the position of men and societies, always conforming, sometimes is also submissive and blind or of uniform and unanimous consent to the unique, absolute and universal truth that the Church preached and preaches. We find that we live today among instances of critical thinking of the human being or in the midst of what the Church herself has called a “moral relativism” that challenges the evangelizing task of the Church herself. We find that the prophetic and moral mission of the Church should return to its source, emphasizing the integral life of the commandment of love for God in our brother as taught by Jesus and not in the carnal intimacy of the disciples of Christ. We find that emphasizing the morality of Christian life on the sexual and carnal life of its believers only reinforces the pansexualism of our society mentioned above and criticized.

It is evident, above all and finally, that the vision and preaching of the Church regarding human sexuality is in crisis as well as the very lifestyles of consecrated men and women and the devout and that the preaching and practice of the sexual lives of all the baptized and of everyone as a recipient of the mission of the Catholic Church, requires — on the part of the Church itself — acknowledgments, revisions, reforms and, especially, deep and urgent decisions to amend our course in this important area in the life of every human being and to make the faith preached and lived within the ecclesial community credible before the world.

There is also evidence of the need — within the Church — for a serious, deep and permanent doctrinal, social and anthropological training targeted to the consecrated and faithful in the Catholic Church.

The doctrine and preaching of the Church must also respond to and allow teachings and contributions that are more respectful, open and timely, regarding the entirety of man’s life. In this particular case, on human sexuality, they can draw heavily from very valid and recent human and other sciences like Theology, Sociology, Psychology, Pedagogy, etc.

Another important point to analyze in this crisis is the role of the laity: What has been their sense of belonging? What is their commitment to the crisis? What is their type of participation: distant critics, mere spectators or baptized members of the People of God committed to the solution and effectively acting and praying as agents of change in the work and life of the Church?

We all wait for the major revisions and decisions needed from the highest authorities of the Church so that — in the midst of this media circus that affects all of us — new lights appear from the shadows and, as they have in the crises of past centuries, great remedies emerge to confront these great evils.