Syrian patriarch visits U.S. flock, urging them to remember Christians in Near East 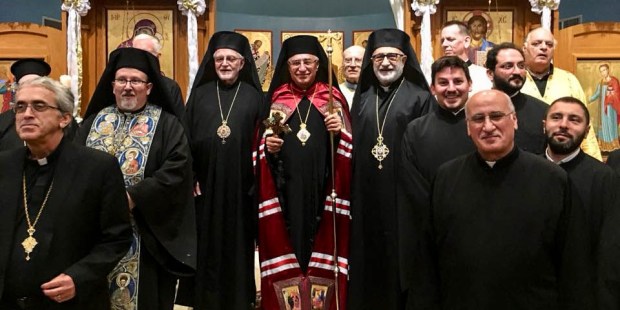 Melkite Greek Catholic Patriarch Joseph Absi speaks of a Church with roots in the Levant, but growing beyond cultural boundaries.

The Patriarch of a Church with roots in the Near East called on American parishes to continue to be open to new members no matter what ethnic background they are from, while at the same time to hold in their heart the suffering flock in the Levant.

Patriarch Joseph Absi, who was elected Melkite-Greek Catholic Patriarch of Antioch, Alexandria, and Jerusalem just over a year ago, has been touring the United States for the past couple of weeks, presiding at the 51st National Melkite Convention in Houston and making pastoral visits to some of the more than 40 parishes that make up the Massachusetts-based Melkite eparchy in the U.S.

“We are a universal Church,” the patriarch said during a Vespers service at St. Ann’s Melkite Church in Danbury, Connecticut, July 13. “We are neither national nor ethnic. We are not bound to one geographical region or one static idea.”

The Melkite Catholic Church traces its roots to the community of Christians of ancient Antioch, which had been in communion with all the other patriarchal Churches, including Rome and Constantinople. With growing interest in greater union with Rome, thanks in part to Western missionary activity, the patriarchate at Antioch split in 1724, and some Melkites joined with the Roman Church.

Today, Melkites are active in Lebanon, Syria, Jordan, Israel and Palestine, but there are more Greek Melkites living outside the Near East than inside. In addition to the U.S., Canada, and Mexico, there are Melkite churches in Brazil, Argentina, and Venezuela.

“We do not refuse to open up to the other and to work with him,” Patriarch Joseph said. “We do not have boundaries. We do not believe in isolation in a limited place and a limited history. This reality presents our richness, our treasure and our strength.”

The cross-cultural nature of the Melkite Church reflects the universality of the Catholic Church, which is, as stated in the Nicene Creed, “one, holy, catholic, and apostolic,” he pointed out.

At the same time, he said, the Melkite Church “cannot discuss this presence in the U.S. without taking into consideration its presence in the countries of the Near East,” where Christians have faced increasing pressure for decades, especially since the rise of extremist Islamist movements such as ISIS. “Our eyes and hearts should be looking to the Levant, where we have social, ecclesial and cultural traditions that we hold dear. This look should be an existential one, and not only for the purpose of sending help. Our mother Church has suffered, and suffers, many crises, all of which have made many faithful leave the land of their parents, to be dispersed—and many difficult social conditions.”

The patriarch, who still lives in his native Damascus, Syria, urged followers to “work together to reach out to them and find ways to bring peace and security, two elements that are essential for stability and happiness. Our Church over there has to be present over here. We cannot turn our back on the Church in the Levant, nor can we pretend that it does not exist anymore.”

In an interview, the patriarch said that for Christians in the Near East, the retreat of the Islamic State and other terrorists has improved the situation “in terms of security and tranquility.”

Sitting in on the conversation was Bishop Nicholas Samra, of the Eparchy of Newton, who acknowledged that some observers believe that in spite of ISIS’s defeat militarily, the Islamic State ideology continues to be a threat.

“There are people who are sympathetic to it, but the radicalism has dropped a lot,” Bishop Nicholas said. “The majority of the Sunni Muslims that were there before all this started were not rebels. Basically, the rebels came from outside and fired them up.”

Patriarch Joseph added that Christians and Muslims “are in the same boat. … The Muslims are leaving, too.”

He said he has focused on two challenges during his first year as shepherd of the Melkite Church: the formation of seminarians and helping priests to live in such as way as to give testimony to the Gospel, “so that the people may trust us.”

“I think this is also a big challenge for ourselves, to live in the Gospel,” he said. “I am trying with my brothers, the bishops, and with the priests to renew our sacerdotal life, so that we can be a good testimony.”

But, obviously, he has also been governing a Church from a capital of a country that has been at war for seven years. Though he declined questions that would be political, he joined other Church leaders who consider Antioch as their spiritual home in denouncing the U.S.-led bombing of Damascus in response to the Bashar al-Assad regime’s alleged use of chemical weapons against rebel forces earlier this year.

Because he was speaking at the Melkite Convention in Houston, he sent Metropolitan Jean-Clement Jeanbart of Aleppo to represent him at the ecumenical meeting in Bari, Italy, called by Pope Francis.

“Let there be peace! This is the cry of all those who are Abel today, a cry that rises up to God’s throne,” Pope Francis said at the July 7 meeting. “For their sake, we have no right, in the Middle East or anywhere else in the world, to say, ‘Am I my brother’s keeper?’ Indifference kills, and we desire to lift up our voices in opposition to this murderous indifference.”

For the occasion of the patriarch’s visit to St. Ann’s, one of two Melkite parishes in Connecticut, parishioners gathered after Vespers for a meal that included several Middle Eastern delicacies. The menu caused Bishop Nicholas to quip that perhaps the patriarch was looking forward to some American ribs and steaks instead. But the meal reflects the ethnic background of the parish, which was founded over a century ago by immigrants from Lebanon and Syria.

Some descendants of those early members still belong to the church, though in many cases children have grown up, gone off to college and found jobs elsewhere. Today, those of Near Eastern heritage share pews with Irish-, Italian-, Slavic-, and Hispanic-Americans, a phenomenon experienced by other Melkite—and other Eastern—churches in the U.S.

“After 120 years in this country, you have to see that there are intermarriages, two and three times over,” said Bishop Nicholas. “Plus, anyone who joins our church, welcome to it. So it takes on a whole new look. It’s an Eastern church of spirituality, but not of ethnic background. The roots are ethnic, but we broke the ethnicity.”

He added that many people who are from a Western Christian background feel a “great attraction to Eastern spirituality. … People join us because they feel the comfort of an Eastern tradition in America. More than half of my clergy have no Middle Eastern roots. … They’re attracted to it because of the spiritual life of the East.”