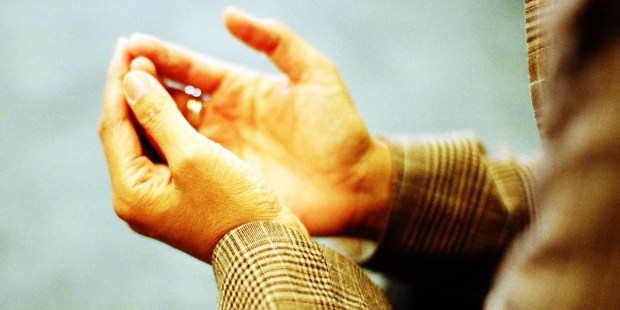 It’s rather comforting to have a checklist. It’s also more than a bit unnerving.

Anyone who has prayed has experienced the frustration of unanswered prayer.

In the Summa Theologica, Aquinas outlines four conditions that must “concur” in order to ensure that our prayer requests are granted.

1. It must be necessary for our salvation.

If it is not something that is “useful for our beatitude,” then we do not merit it, according to Aquinas. So if you are praying for a material need—even if it is something important like making rent or getting a job—that helps to explain why such a prayer might not be answered.

Taking a page from Aquinas, perhaps our best approach is to pray for our daily needs in such a way that they are ordered for our salvation. Pray for the mercy to forgive those who have made it harder to make rent. Or ask God for the grace of perseverance to endure your difficulties, whatever they might be.

Read more:
Christ calls us to a ‘difficult logic’: Pope says we need to pray blessings on our enemies today

Of course, this doesn’t mean we shouldn’t ask for help with our material needs. It’s just that we cannot be sure such requests will be answered.

Aquinas quotes St. Augustine on this point: “He who faithfully prays God for the necessaries of this life, is both mercifully heard, and mercifully not heard. For the physician knows better than the sick man what is good for the disease.”

As Jesus says in Matthew 7, our heavenly Father knows what is best for us. So, when it comes to prayers for our temporal affairs, the emphasis falls on trusting God, rather than expecting a specific outcome.

2. For yourself. Even if you have satisfied the first criterion, your request might not be fulfilled if it is for someone else. The reason, according to Aquinas, is that we cannot “merit” on our accord salvation for another person.

Again, this isn’t to say that we shouldn’t pray for others. It’s just that such prayers are not always granted. After all, elsewhere in the Summa, Aquinas himself encourages us to pray for others.

3. Do it piously. In the Summa, Aquinas defines piety as honoring and worshipping God. The honor we render to our parents is a model. (See the Second Part of the Second Part, Question 101, Article 1.)

It makes sense that we’d need to pray in a reverent and worshipful manner. But Aquinas appears to have more than this in mind. In setting out his four criteria, he urges us to do good deeds as another way to be “without any doubt we receive what we ask for” (See the Second Part of the Second Part, Question 83, Article 15, the Reply to Objection 2).

Later, in Question 101, Aquinas explains that good works are considered to be part of piety, quoting Augustine’s City of God: “Piety … is commonly understood as the proper designation of the worship of God. Yet this word also is used of dutifulness to parents. The common people, too, use it of works of charity, which, I suppose, arises from the circumstance that God enjoins the performance of such works, and declares that He is pleased with them instead of, or in preference to sacrifices” (Book 10, Chapter 1).

4. Do it perseveringly. The last reason that we may not receive what we ask for, is simply that we stopped asking, according to Aquinas, who cites St. Basil of Caesarea.

Or, it might be that God has simply decided to fulfill the request at a later time. Again, Aquinas appeals to Augustine: “For some things are not refused, but are delayed till they can be given at a suitable time” (Tractate 102 on John 16:23-28).

Aquinas sums up all four conditions this way: “Hence it is that four conditions are laid down; namely, to ask—‘for ourselves—things necessary for salvation—piously—perseveringly’; when all these four concur, we always obtain what we ask for.”

Other things we need

Although he does not list them in his criteria, elsewhere in the question, Aquinas mentions several other conditions or qualities that are necessary to be able to even pray in the first place.

His starting point is the idea of efficacy—defined as the “power to produce an effect.” According to Aquinas, prayer produces an effect in two ways, based upon its end—the goal it is seeking—and how it seeks that end.

First, prayer achieves its desired effect because it springs from charity and has as its end our “eternal good.”

Second, prayer is effective because it is a form of requesting things from God that is made possible by His sanctifying grace. Even when we do not have sanctifying grace, our prayer for it is still enabled by the grace of God, Aquinas adds.

There are several other virtues we need in order for prayer to be effective: “Faith is necessary in reference to God to Whom we pray; that is, we need to believe that we can obtain from Him what we seek. Humility is necessary on the part of the person praying, because he recognizes his neediness. Devotion too is necessary: but this belongs to religion, for it is its first act and a necessary condition of all its secondary acts.”

How do these virtues relate to the four criteria mentioned earlier? To use a modern idiom, it seems that the virtues of charity, faith, humility, religion, and devotion, along with divine grace, are necessary but not sufficient conditions for a prayer to be answered.

In other words, we need them to be able to even say a true prayer.

The four criteria above are what ensure that the prayer is answered. However, the last criteria reminds us that, even if we are guaranteed a certain response, there is no guarantee as to when that that will occur.

In a way, this is a great comfort. But it can also be a terrifying challenge. It is a bit unnerving to realize that if ask the Creator of the universe for the right thing in the right way we will get it. Be careful what you pray for.