Survey finds that US Catholics are well educated about Christian persecution 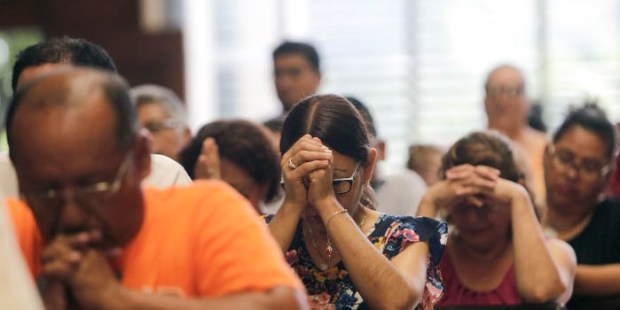 But they rank it below concerns such as climate change and human trafficking.

Catholics in the United States tend to trust what they hear in their parishes when it comes to the issue of religious persecution around the world.

That was one of the findings of a study commissioned by Aid to the Church in Need-USA, a papal charity that assists Churches under duress in various parts of the world.

But, the survey also found, Catholics tend to consider issues other than the persecution of Christians, such as human trafficking, to be more important.

“Things like climate change, human trafficking—they’re all important issues—were all [ranked] above” the persecution of Christians, said Aid to the Church in Need’s Edward Clancy, in an interview Monday. Persecution “ranked at the bottom of the six categories that we listed. That was somewhat concerning. Everything was either 10 percent or 20 percent more important to people.”

Clancy spoke with Aleteia as he prepared to attend a U.S. State Department-sponsored gathering in Washington, D.C., to examine the challenges in defending religious liberty in countries around the world. Called the “Ministerial to Advance Religious Freedom,” the three-day gathering is featuring Secretary of State Mike Pompeo; U.S. Ambassador at Large for Religious Freedom Sam Brownback; representatives from foreign governments, international organizations, and religious communities.

Clancy, who is Aid to the Church in Need’s director of evangelization and outreach, said that among American Catholics there is “a great trust of local information,” such as the parish bulletin, in disseminating news about persecution. “That was a key insight. It shows that people do trust what’s being said at Mass, what’s being talked about in their local parishes. … If the bishops do make statements about it, there’s an ear out there to listen.”

He said that when the survey asked American Catholics to rank the countries where they thought the highest amount of persecution is happening, their perception lined up pretty well with reality. “They said North Korea, Iran, Iraq, Syria, Pakistan. All of the above over the past couple of years have been very high in the area of Christian persecution, so that actually shows there is general savvy or awareness of where things are pretty bad,” Clancy said.

Key findings of the survey, conducted by McLaughlin & Associates, include the following:

“What the survey reveals quite clearly is that there is a need to increase the engagement level of the US Catholic Church when it comes to global Christian persecution—both at the grassroots and leadership levels,” said George Marlin, chairman of Aid to the Church in Need-USA, in a statement. “The issue has to become a priority.”

Marlin said the group hopes the survey will “show the bishops and their priests that the laity need more education and leadership to give them a stronger sense of the seriousness and pervasiveness of Christian persecution around the world.”

Fr. Benedict Kiely, founder of Nasarean.org, which assists persecuted Christians, said he agrees with the findings. But he insisted that bishops and priests are often the “first who need to be educated about the seriousness of the persecution.”

“It’s stunning how little is known,” Fr. Kiely said. “Is it ignorance or indifference? It takes someone like Fr. George Rutler in New York City to welcome the first Shrine for the Persecuted Church in the world—because he had consistently written and spoken about the persecution.”