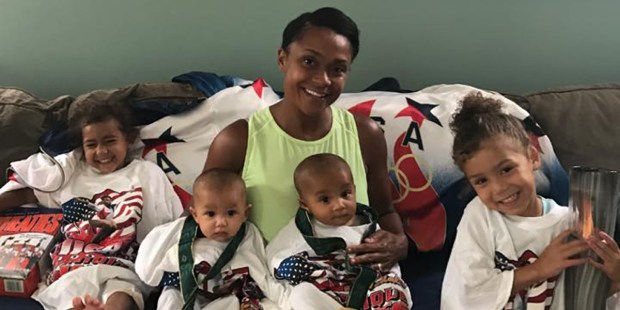 The mom-of-four says raising her kids has been her most “fulfilling goal.”

Throughout her gymnastic career, Dominique Dawes was admired by her fans and teammates alike for her positive attitude, dedication, and impressive skills — earning her the nickname “Awesome Dawesome.” Now, a few decades after those glittering podium days, the record-breaker has shared on her Facebook account what has truly been her most “fulfilling goal,” and that is raising her four adorable children, ages 4 and under: Kateri, Quinn, and twins, Lincoln and Dakota.

In a post that most moms can relate to, Dawes shares that even those grueling training sessions — calculated at around 8,000 hours of intensive training — can’t compete with life as a stay-at-home mom. “I’ve never been more tired and worn out in my life, as I am being a mother! I wouldn’t have it any other way!!”

It would seem the Catholic convert is injecting the same passion and dedication into motherhood that she once gave to her sporting career. And perhaps this comes as no surprise for the woman who competed in three Olympics and became the first black person ever to win an Olympic gold medal in gymnastics.

Yet, while all these records are outstanding, Dawes, who’s married to a Catholic school teacher, says there hasn’t been anything more incredible than the ability to raise her four children. “Striving to have them be the best people they can be and making a positive influence on the world is the best feat I can imagine to this day,” she says.

Dawes also freely admits how exhausting mothering is, yet that it’s “better than gold.” She wants to inspire others and bring them on her journey, ending a recent Facebook post with a rallying: “We are all in this together!”

Back in her pre-baby days, and with several years hindsight, Dawes shared with the author of her biography: “I really think that God placed me in the gymnastics arena because that was my passion … but my purpose is to inspire people with that passion.” The busy mom has continued to inspire and reach out to others through her philanthropic work; partnering up with the National Park Foundation — she’s a keen hiker, being a spokeswoman for the Girl’s Scout Movement, as well as various fitness initiatives to encourage healthier lifestyles.