Should you ever keep a secret from you spouse? 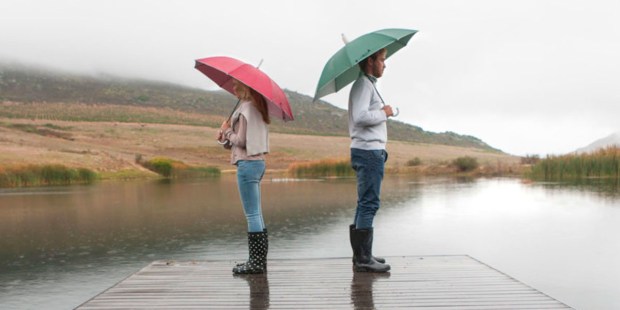 Marriage experts and real women debate the gray areas of keeping secrets from your husband or wife.

What you don’t say in a marriage can be even more telling than what you do say. Stacey Greene, author of Stronger Than Broken: One Couple’s Decision to Move Through An Affair, knows this fact better than most. After learning about her husband’s secret affair, she wrote her book to document her harrowing journey of recovering from that infidelity as a Christian woman. While writing and working through her unfortunate situation, Greene realized a simple truth about marriage: no secret is worth keeping from your spouse.

“In fact, while we were resurrecting the marriage, we began being brutally honest with each other, even if we knew it would hurt the other one’s feelings,” says Greene. “Marriage is rough, but honesty is paramount. It’s okay if I say, ‘Does this dress make my butt look fat?’ and he says, ‘Yes.’ I simply change dresses.”

That may sound extreme to some of us who like a little confidence-boosting white lie every now and again. But as far as Greene is concerned, one small secret as mild as an unflattering piece of clothing has the potential domino into more secrets and jeopardize the foundation of trust between husband and wife.

“Trust is at the pinnacle of any lasting and meaningful relationship,” she says. “We need to ask ourselves why would we even want to keep a secret from our wife or husband. What is the purpose? What are we afraid of the other person finding out about us?” Greene’s argument suggests that the underlying motives for telling the truth should outweigh the sometimes awkward or temporary wounded recreation your spouse might have. To her point, most of us don’t really want to leave the house in a dress that doesn’t look nice.

The truth will come out

Greene argues that no matter what kind of secret you may want to keep, your spouse will eventually learn the truth.

First and foremost she applies this to money. “If it is a financial secret, it will no doubt come out at some point,” she says. “Maybe it will come out at tax time, or when you must declare bankruptcy or lose a home. There goes trust and security in the marriage.” Financial talks are difficult — there’s no doubt about it. But between arguing about truths now rather than realizing your assets were actually a pack of lies later … which would you choose? And this goes both ways: if you feel you’re in the dark about your joint finances, don’t stay there; speak up. There’s no time like the present to find out the real scoop.

But the other big lie married couples often worry about is fidelity: “If it is a relationship secret (like cheating or being cheated on), there is a distinct probability that the affair will eventually be found out,” says Greene. “If it is a health secret (like he or she had been sleeping around), then diseases can be transmitted to the innocent partner. If there was a secret child from another relationship, that child may look up his biological parents and disrupt the lives of the biological family.” So the chances of being caught in your lie are many, and possibly all even more hurtful than hearing the truth directly from your partner. Though, of course, it’s always better simply not to do anything in a marriage that you feel you need to lie about to begin with.

She adds, “What we have to understand about secrets is that there is always a chance of being caught, which erodes trust.”

Anni Harry, who is a married Catholic woman, agrees that chances are good you will get caught no matter what, so you might as well be honest with your spouse in the first place.

“I am an open book,” she says. “I don’t have anything I keep from him simply because I am a firm believer that he will find out anyway. Also, I believe a lie by omission is still a lie, and most secrets are kept from someone to keep them out of the loop.”

But are there tiny exceptions?

Still, some married people argue that there are minor or short-term secrets that may be safe to keep, as long as your relationship is still largely based on trust and open communication.

For instance, gifts. “Small secrets — like, what you are gifting for birthdays, Christmas, etc. — are okay, but if it is pricey, I run the price by him first,” she says.

Alicia Schonhardt, the blogger behind the Catholic homeschooling blog Sweeping Up Joy, says that her secrets are her harmless guilty pleasures.

“My secrets involve the amount of chocolate I’ve consumed in one day and what fluffy TV shows I watch regularly,” she says. “If asked directly, I answer honestly. Yes, I watch Dancing With the Stars. No, I’m not proud of it. That’s pretty much it.”

Schonhardt adds, “There might be other things that I don’t tell him, but nothing is off the table for discussion if he brings it up.”

Chiara Pierpaolo Finaldi, a married Catholic woman in London, doesn’t believe you have to own up to all your tiny, embarrassing mistakes … though don’t expect to keep such matters a secret for long.

“You don’t need to tell [your husband] straight away that you ruined his favorite shirt when you washed it or shrunk his really special sweater that accidentally ended up in the dryer,” she says. “He will eventually find out.”

But slightly more substantial secrets may make sense to guard, too. If your friend has told you something in confidence that has absolutely nothing to do with your husband, many women feel you can keep mum on the matter.

“I keep to myself the things friends tell me if they don’t give me permission to share it with him, like marriages falling apart, for instance,” says Jennie Lawlis Goutet, who runs the blog, A Lady in France. “I always ask my friends first. But he’s respectful of my friends’ privacy and doesn’t ask further questions about things they’re not willing for him to know.”

Another type of secret that may make sense to guard is specific gossip about your husband.

“I keep negative things other people have said about him, from him,” says Leah Gray, who blogs about her experiences as the wife of an addict. “My husband battled an addiction and sometimes people say unkind things. The other thing I do is make it very clear I won’t listen to it either. It’s a personal integrity thing. He has no idea I do it, but I want to bless him in my secret life as well.”

Other than that? “I have no secrets from him,” says Grey. Because, while there are teeny exceptions, most secrets are hurtful, if not downright damaging.

Read more:
Is it gossip to share my friend’s problems with my spouse?